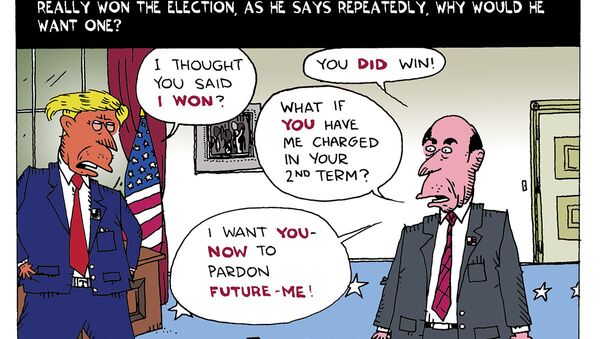 Ahead of US President Donald Trump’s projected exit from the Oval Office in January, reports have suggested that the commander-in-chief is expected to issue a flurry of pardons to close associates, including former campaign officials.

A Tuesday report from the New York Times has alleged that Rudy Giuliani, Trump’s personal lawyer and a former New York City mayor, asked the president about prepping a “pre-emptive” pardon for him before Trump's anticipated January exit from the White House.

Citing two sources familiar with the discussion, the Times indicated that it wasn’t clear who brought up the possible pardon or if Trump was even considering offering the protection to Giuliani, whose potential criminal exposure is also uncertain at the moment.

Giuliani has been under investigation by Manhattan federal prosecutors over his finances and his business dealings in Ukraine; however, Robert Costello, Giuliani’s lawyer, told the Times that his client was “not concerned about this investigation because he didn’t do anything wrong.”

Giuliani rejected the Times' report of a pardon discussion in a Twitter statement in which he said the story was a complete lie, and that it was an example of the outlet fabricating stories "again." Reports regarding potential pardons from the Trump administration have run rampant, with speculation hitting a new high before Trump pardoned former national security adviser Michael Flynn last week.