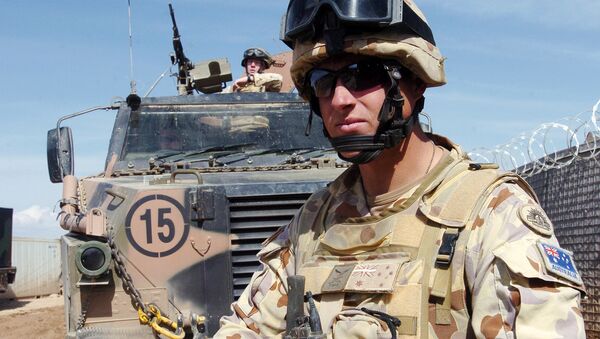 Tim Korso
All materialsWrite to the author
Canberra recently unveiled a comprehensive report about how its military force committed war crimes during their mission in Afghanistan, which nave seen the killings of innocent civilians, including infants.

The Chinese government of President Xi Jinping refused to apologise to Canberra for a recent tweet by Foreign Ministry spokesman Zhao Lijian containing a fake image of an Australian soldier smiling while slitting the throat of an Afghan child, as the latter's face is covered by an Australian flag. Another spokesman for the ministry, Hua Chunying, turned down requests for an apology and retraction issued by Australian Prime Minister Scott Morrison.

"You cited the Australian side's words that the Chinese government should be ashamed. Shouldn't the Australian government feel ashamed that some of its soldiers on official duty in Afghanistan committed such cruelties?" Hua responded.

The image, which sparked a backlash across Australia, was captioned "don't be afraid, we are coming to bring you peace!" and apparently referenced a recent publication by the Australian Defence Force (ADF) Inspector General, a report on alleged war crimes committed by Australian soldiers deployed in Afghanistan. The report found that some 39 Afghani civilians or prisoners of war had been unlawfully killed by Australian soldiers, ADF chief Angus Campbell said.

Shocked by murder of Afghan civilians & prisoners by Australian soldiers. We strongly condemn such acts, &call for holding them accountable. pic.twitter.com/GYOaucoL5D

The Canberra prime minister vowed that the report findings would be relayed to an Office of the Special Investigator and that the perpetrators would be prosecuted in accordance with the country's laws. The Australian Foreign Ministry extended its deepest "apologies for the misconduct" to Kabul, noting also that Canberra is considering the report findings.

The exchange between Australia and China over Beijing's controversial fake image comes amid another scandal involving the ADF contingency in Afghanistan. The Guardian Australia recently unearthed an alleged 2009 photo of an unidentified ADF special forces soldier in a bar, drinking a beer from the prosthetic leg of a dead Taliban fighter. Another photo, published by the newspaper, shows two solders "dancing" with what is alleged to be the same leg, which purportedly belonged to a Taliban fighter who died during an attack at the group's compounds and a tunnel at Kakarak in Uruzgan in April 2009. The incident forced Australia's chief of defence forces to issue an apology to Afghanistan for the "disgraceful" conduct of the country's soldiers.