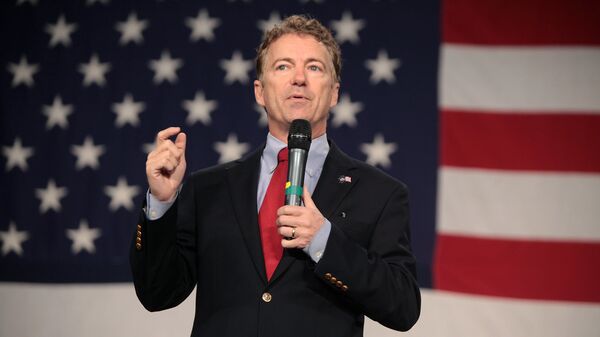 Svetlana Ekimenko
All materialsWrite to the author
Several US states have declared Democrat presidential candidate Joe Biden as their winner, with official results to be decided on 14 December during the Electoral College vote, as Donald Trump vows to continue the fight for a legitimate vote count, despite allowing for the transition process to start.

The Republican senator for Kentucky, Rand Paul, on Sunday weighed in to the election “fraud” debate, spear-headed by Donald Trump and his legal team.

Interesting . . . Trump margin of “defeat” in 4 states occurred in 4 data dumps between 1:34-6:31 AM. Statistical anomaly? Fraud? Look at the evidence and decide for yourself.(That is, if Big Tech allows u to read this)

​The senator’s tweet urged readers to consider the “data spikes” in four states where Trump was projected as having lost in the presidential election, and decide whether the margin of defeat to Joe Biden had occurred because of “statistical anomaly” or “fraud”.

By Sunday afternoon, in line with Twitter's civic integrity policy, the tweet was flagged with the warning: “This claim about election fraud is disputed.”

Paul’s Twitter post contained a link to an article, “Anomalies in Vote Counts and Their Effects on Election 2020”, published on 25 November that contained an analysis of the decisive vote updates in Michigan, Wisconsin, and Georgia on and after election night.

The information aimed to demonstrate how Biden supposedly received “vote spikes” in Michigan, Wisconsin, and Georgia, according to the analysis, in the early hours of 4 November 2020.

According to the article, the “vote dumps” in favour of Biden eroded Trump’s lead.

Biden, who has since been proclaimed the projected President-elect by most US media, achieved success by purportedly prevailing in key swing states such as Pennsylvania, Michigan, Wisconsin, Arizona and Georgia.
Meanwhile, the Trump campaign has spent weeks launching legal challenges in battleground states, where the current incumbent claimed there has been massive vote “rigging”.

​Earlier, Trump’s campaign spent $3 million for a recount in Wisconsin’s two largest counties - Milwaukee and Dane - where the former vice-president originally emerged ahead by about 20,000 votes. However, after the recount, ​Biden’s margin of victory over Trump was slightly increased.

Wisconsin has finished a presidential recount ordered for two Democratic-leaning counties, and Joe Biden is still the winner of the state by more than 20,000 votes. President Trump paid for the recount, which delivered a net gain of 87 votes to Biden. https://t.co/usWdM7eL9o

The Wisconsin recount has been part of the President's efforts to overturn the results, where his team alleged that sweeping fraud and irregularities have been conducted on the part of Democrats.

A day after Pennsylvania’s highest court had thrown out a lower court’s order preventing the state from certifying results from the 3 November US election, Donald Trump blasted the judges’ decision in an interview for Fox’s Sunday Morning Futures.

Denouncing the courts for his campaign’s so far unsuccessful legal challenges, he said:

“We’re not allowed to put in our proof. They say you don’t have standing… We have affidavits, we have hundreds and hundreds of affidavits."

Despite refusing to concede victory, Donald Trump has since allowed for the transition process to start, with Joe Biden tapping his picks for the key posts in the White House. On 14 December the Electoral College meets to vote for the next president of the United States.