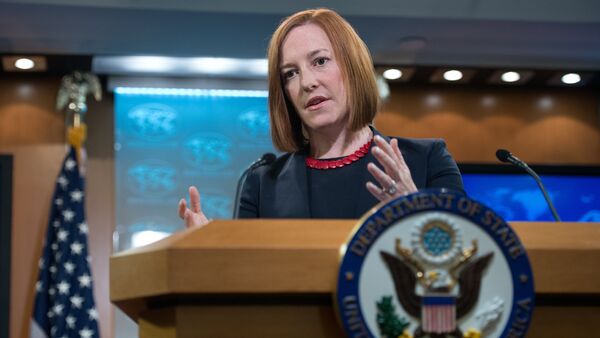 Barack Obama-era State Department spokeswoman Jen Psaki, recently tapped by projected president-elect Joe Biden to be his White House press secretary, was forced to double back and correct a blunder committed earlier in the day.

On 30 November Jen Psaki went on Twitter to hail a “diverse” incoming team of the most “battle-tested” communicators, yet in her zeal tagged the wrong woman.

This is a team of some of the most talented, battle-tested communicators out there @KBeds, @K_JeanPierre, @SymoneDSanders, @AshleyEtienne09 @EAlexander, @pilitobar87---who are also all women, most diverse team in history and also 6 Moms of young kids

​John Harwood, White House correspondent, was quick to swoop in on the error, tweeting that he though Psaki might mean a different Elizabeth Alexander.

i think you mean @EAlexander332

​Several other netizens immediately remarked on the mistake.

Good job on the communication then. Too funny. What a clown show.

​Psaki quickly backtracked to correct her own mistake tweeting that her “only regret” was “tagging the wrong Elizabeth Alexander”. She then proceeded to hail the right person appointed new communications director for first lady Jill Biden, touting her as a “legal eagle”.

My only regret today is tagging the wrong Elizabeth Alexander. The right one is @EAlexander332 who is a legal eagle, a communications guru and a trusted team Biden longtime advisor and new communications director to @DrBiden

​Netizens suggested that Psaki would need to polish up her “tagging” skills.

Not a great start

Let's hope we do not have to deploy the 6th fleet to Belarus )))). Good luck.

During her tenure as spokesperson for the US State Department, Jen Psaki became something of a meme-generator due to her perceived geopolitical gaffes during press briefings. Particularly memorable was the staffer’s parrying with long-time verbal adversary Matthew Lee, a reporter from AP.

One of Psaki’s most infamous blunders was when she weighed in on the transportation of gas, which in Europe, according to her, flowed "from west to east."

In another instance, Psaki floundered when speaking about carousel voting - an election rigging method by which voters are bussed around to cast ballots at multiple polling stations.

​As AP’s Lee asked her to explain the term, she awkwardly admitted that she was not "familiar with it".