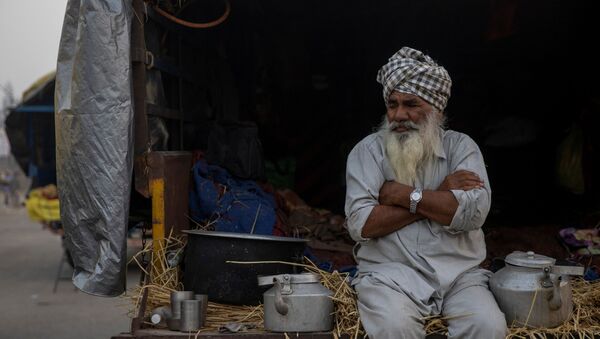 NEW DELHI (Sputnik) - The Indian Ministry of Agriculture and Farmers' Welfare on Monday invited the Farmers' Union to discuss their problems with a high-level committee at a December 1 meeting amid mass protests against new laws seeking to reform agricultural practices in the nation.

On Thursday, thousands of farmers across India marched toward the capital to express dissatisfaction with new laws, as police used tear gas and water cannons to push them back. Following the suppression, the government repeatedly invited farmers' representatives to hold talks, instead of blocking highways. Protesters rejected the offer, however, saying that the new laws must first be scrapped.

"Indian government-level talks were held twice with you to solve the problems of the farmers. You [farmers' organizations] are cordially invited again on December 1 [...] at Vigyan Bhawan [the government's premier convention center], New Delhi to have a discussion with a high-level committee of honorable ministers," the ministry said.

Under new laws passed by Prime Minister Narendra Modi’s government in September, farmers are able to sell their wares outside regulated markets and enter into contracts with buyers at a pre-agreed price. The farmers are also allowed to sell their products outside state markets. The agriculture industry, however, fears that the new regulations will lead to the exploitation of farmers by big corporations.