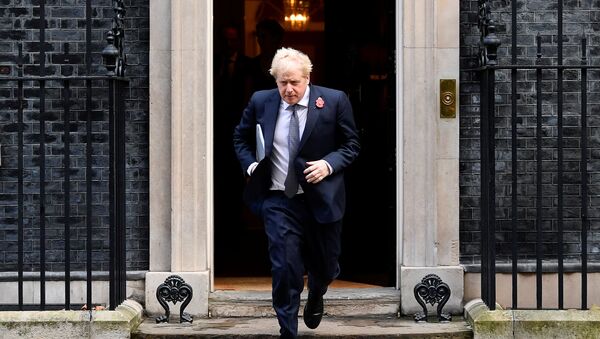 Svetlana Ekimenko
All materialsWrite to the author
Since polls closed on 3 November in the 2020 US presidential election, about 30 percent of Donald Trump’s posts on Twitter have been flagged as containing or potentially including “misinformation”, according to a Variety analysis, including his claim that Democrats were trying to “STEAL” the election.

The outlet cites senior Whitehall sources as saying that the decision came after the Prime Minister observed how the social media giant had slapped warning labels on over 65 tweets by US President Donald Trump during the 2020 election, where the incumbent claimed extensive voter “fraud”, while failing to apply any of the same policy to tweets by the projected President-elect, Democrat Joe Biden.

A reportedly alarmed Johnson expressed concern that he too could be subjected to similar Twitter “fact-checking”. 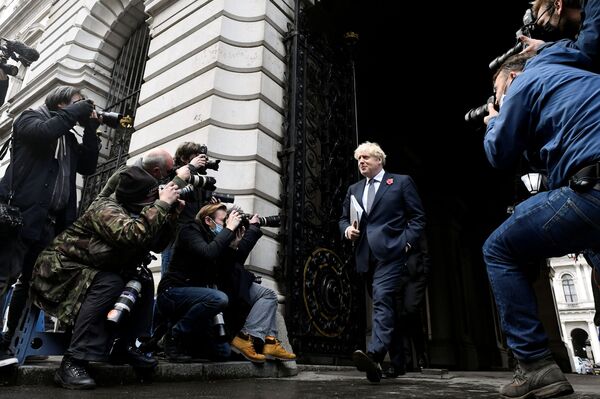 Accordingly, the Prime Minister is claimed to have discussed amending the Online Harms Bill that is currently before Parliament.

The legislation would apply to “disturbing” content such as suicide footage or jihadi videos on social media platforms like Twitter, Facebook and Instagram, with the government urged to bring forward the “tough” legislation after experts warned that coronavirus-driven lockdowns had created a “perfect storm” for online offenders to groom youngsters.

Now, Boris Johnson is believed to be considering applying such a bill to “limit the ability of a bunch of woke Californians to interfere in the UK", according to a source referenced by the publication.

However, the Online Harms legislation has been delayed as still lacking “clarity” in how it would be enforced, according to industry stakeholders.

Tech companies and online safety groups had been requested earlier to weigh in on the Government’s plans for the proposed regulation, in a report from the Parliamentary Internet, Communications and Technology Forum (PICTFOR).

There have been concerns that the legislation might result in the censorship of mainstream content on sites which publish news stories about related issues, such as terror attacks, which are subsequently shared on social media platforms.

Policy documents related to the Bill are ‘sitting in Boris’s box, and are likely to stay there until after Christmas’, claimed a source, adding:

“Boris did not like what he saw in the US election and has asked for more time to consider how to avoid the same thing happening to him in future.”

Last week, a new watchdog, the Digital Markets Unit, was announced as part of moves towards the regulation of digital monopolies.

However, it is still unclear how the new body, which starts work in April and is anticipated to become fully operational by 2022, will function, who it will cover, and precisely what powers it will wield.

It is likely to be given the power to levy fines to prevent customers or companies from being treated unfairly. The outlet also says it may ensure that leading online firms provide smaller rivals access to their data troves.

The unit will operate as part of the Competition and Markets Authority (CMA), which urged stronger powers over Google and Facebook, which together command 80 percent of Britain’s digital ads market.

CMA had recommended in its review that the new regulations cover platforms funded by digital advertising, and designated as having “strategic market status”.

The developments come in the wake of the 2020 US presidential election, which pitted Republican President Donald Trump, who is seeking reelection to the White House, against his Democrat rival Joe Biden.

Biden has since been projected by most US media as the winner of the election, with Trump refusing to concede victory and decrying voter fraud, as his legal team has launched lawsuits in a number of states.

Twitter has applied more than 300,000 warnings to messages related to the US election as part of its ‘civic-integrity policy’ announced as seeking to address ‘misleading or disputed information’.

Facebook introduced similar policies during the election to ‘combat voter suppression and misinformation’.

Donald Trump’s posts on Twitter claiming he had won the election in the United States were slapped with a notice claiming multiple sources called the result differently. His subsequent allegations that the election was being “stolen” from him were concealed by the social network behind a message warning that the content was “disputed” and “might be misleading”.

​To see the text of Trump’s tweet, users had to click “View” on the warning label. Furthermore, the tweet concealed behind the warning cannot be directly retweeted, liked or commented on. It may be retweeted as a quoted tweet.

The Twitter Safety team said: “We placed a warning on a Tweet from @realDonaldTrump for making a potentially misleading claim about an election. This action is in line with our Civic Integrity Policy.”

Trump’s supporters slammed the move, saying the new policy was overwhelmingly directed at them because of what they claimed was an “institutionalised Left-leaning bias” at the company.

Commenting on reports that the UK Prime Minister Boris Johnson was considering legislation to control Twitter in terms of the material it hosts, Dr Binoy Kampmark, Senior Lecturer in the School of Global, Urban and Social Studies at RMIT University, Australia, believes such a measure can only be of limited effect.

“Twitter remains a US company and allows the posting or removal of material in accordance with section 230 of the Communications Decency Act. It is neither liable for the content of 'producers' and it is also permitted, in certain circumstances, to deal with content on what are called "user terms" without legal consequences,” says the expert.

Dr Binoy Kampmark recalls that President Donald Trump did suggest, through his Attorney General William Barr, that a revision of the provision, if not a total repudiation, would take place permitting US authorities to target Twitter and social media platforms for removing or not running certain material, claiming bias.

It remains to be seen what projected president-elect Joe Biden does, says Kampmark, though he has also come out against section 230.

Generally, says the lecturer, while politicians “hate” Twitter, they find it hard to do without.

“What Johnson desires is typical of politicians who want it both ways: they want the reach of Twitter and its exposure, but they want access that is untrammelled, and to punish such platforms in certain cases if they produce material that is supposedly not in accord with a government's wishes”.

Twitter, according to the expert, shall always “hold the keys”, adding that it will, at stages, “throw them away to those it thinks unfit for using its platform”.

While reflecting on the reliance and addiction of politicians to Twitter, Dr Kampmark, when questioned whether it was possible to avoid censorship on social media, gave the short answer - no.

“Censorship always takes place, whether it is through the community of users, or the company running the social media platform. It is already clear that social media giants are now trying to take a firmer hand in controlling the narrative of what is produced on their platforms. Pressure on Twitter to "fact-check" and to suggest what might be dubious or not in the vast infosphere is itself an admission that some form of editorialising is taking place. The moment material is removed, an act of censorship has been approved."