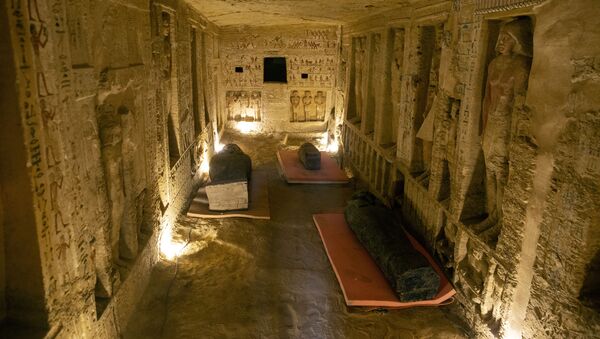 © AP Photo / Mahmoud Khaled
Subscribe
International
India
Africa
Svetlana Ekimenko
All materialsWrite to the author
Archaeologists uncovered 59 mummies in sealed sarcophagi and nearly 30 statues of ancient gods in the Egyptian necropolis of Saqqara in October, confirming the reputation of the site as “one of Egypt’s most important and longest-lasting burial places for over 3,000 years”.

Colorful curses aimed at scaring away intruders grace some of the walls of tombs in Saqqara – the Egyptian plateau that is home to hundreds of tombs and nearly a dozen ancient pyramids, claim scientists. 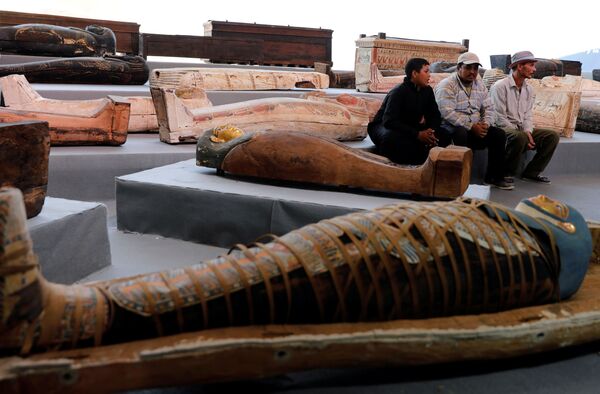 Sarcophaguses that are around 2500 years old, from the newly discovered burial site near Egypt's Saqqara necropolis, are seen during a presentation in Giza, Egypt November 14, 2020.
© REUTERS / MOHAMED ABD EL GHANY

The Saqqara site, which for 5,000 years of Egyptian history served as a necropolis for Memphis, the country’s first capital, recently offered up miraculous findings that bolstered its “significance as one of Egypt’s most important and longest-lasting burial places”, according to the world’s leading Egyptologist, Salima Ikram.

Located approximately 30 kilometres south of Cairo, the site hosts at least 11 pyramids, hundreds of tombs of kings from the first and second dynasties, and the legendary Step Pyramid, erected for the third dynasty’s king Djoser.

Pharaoh Djoser is responsible for building the first monumental stone building on Earth. Designed by his best friend and architect, Imhotep the world's first Multi-Genius. Djoser's Step Pyramid became the benchmark for architecture for the next 5,000 years. pic.twitter.com/llSLsPVze7

As ancient Egyptians were laid to rest by priests in Saqqara inside wooden boxes adorned with hieroglyphics, with the sarcophagi sealed and buried in tombs, archaeologists have discovered inscribed warnings were resorted to as a means of deterring trespassers, particularly those seeking to desecrate the mummies' resting places.

Salima Ikram, an Egyptologist at the American University in Cairo, wrote in an email cited by Business Insider that the warnings would “generally say that if the tomb were to be entered by an impure person (probably in body and/or intention), then may the council of the gods punish the trespasser, and wring his or her neck like that of a goose."

The quoted curse was discovered in the tomb of the vizier Ankhmahor, a pharaoh's official who lived during Egypt's 6th dynasty and was buried in an above-ground tomb shaped like a rectangular box, called a mastaba.

Tombs of this nature were used all across Egypt, including near the Giza pyramids. 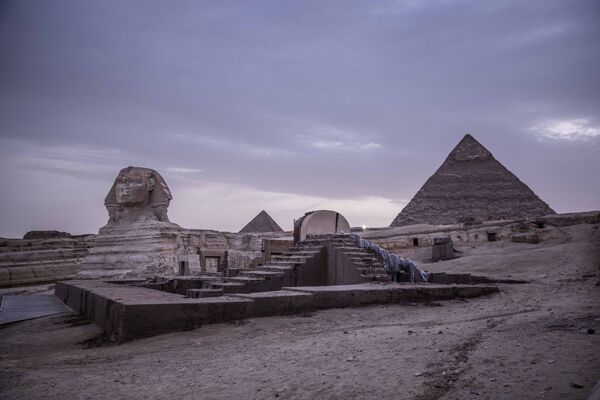 This March 30, 2020 file photo, shows the empty Giza Pyramids and Sphinx complex on lockdown due to the coronavirus outbreak in Egypt. In July, fearing further economic fallout, the government reopened much of society and welcomed hundreds of international tourists back to resorts, even as daily reported deaths exceeded 80. Restaurants and cafes are reopening with some continued restrictions, and masks have been mandated in public
© AP Photo / Nariman El-Mofty

The curse, roughly translated, warned any potential intruder that whatever they "might do against this, my tomb, the same shall be done to your property". The warning also hinted that the deceased vizier possessed knowledge of secret spells and magic. Thus, the curse threatened to instil in "impure" intruders with the "fear of seeing ghosts".

According to Ikram, who elaborated on the recent discoveries made at the site in a new Netflix documentary "Secrets of the Saqqara Tomb", curses of this nature were intended to ward off grave robbers.

​The punishment for anyone caught trespassing or trying to loot the tomb of the dead was commensurate with the crime, says Ikram, which was “probably death for a royal tomb".

If one violated a noble's tomb, they would be required to return the stolen goods, face punishment that could include being beaten, and potentially have their noses cut off.

For those whose intentions were pure and peaceful, read the writings in the tomb of Ankhmahor, the noble visier offered protection in the court of Osiris, the Lord of the Underworld who judges dead souls before they pass into the afterlife.

Curses of a similar nature have been found in a few other tombs across Egypt, said Ikram, "with the majority being recorded from the Old Kingdom" — between 2575 and 2150 BCE.

The expert goes on to explain that the tombs were perceived as houses for the dead in their afterlife, and were, accordingly, decorated with all kinds of scenes of the life they hoped to enjoy for eternity.

"You wanted to have a fabulous afterlife, so you had a fabulous tomb," she says in the film.

Over the last few months 160 human coffins were unearthed at the Saqqara site, which archaeologists intend to disperse to museums around Egypt. Several were opened, with the mummies extensively examined.

Saqqara Reveals More Exquisite Coffins, Mummies, and Rare Wooden Statues: This is an extraordinary time for anyone interested in Egyptian tombs. A new fascinating film, Secrets of the Saqqara Tomb, has premiered on Netflix. Plus, we just learned that… https://t.co/D3OkkzesLh pic.twitter.com/47OTKUIs8J

This made some members of the public uneasy, as the archaeologists opened coffins that had been sealed for more than two millennia.

Who looks at 2020 and says you know what this year needs...a mummy tomb opening? https://t.co/cKUIDILXpj

​Ikram insists that handling the mummies was fraught with negligible risk of being contaminated with purported ancient microbes or fungi.

"If people wear gloves and masks, it should be fine," she said.

Fears of dangerous pathogens contained in mummy tombs dates back to archaeologist Howard Carter’s discovery of King Tutankhamen's tomb in 1922.

26 November 1926. The British archaeologists Howard Carter and Lord Carnarvon broke the seal and entered Pharaoh Tutankhamun’s tomb in Egypt for the first time in over 3,000 years. It was the greatest archaeological find of the 20th century. pic.twitter.com/KicPlPCfHp

​A member of Carter's expedition, its financial sponsor George Herbert died suddenly six weeks after the burial chamber was unsealed. Further research showed Herbert had died of blood poisoning from an infected mosquito bite on his cheek.

​However, some researchers speculated that the tomb had contained toxic mould that could have infected the man. Those events had rekindles wild theories of the “mummy's curse". Incidentally, the walls of King Tut's tomb were curse-free, claim experts.