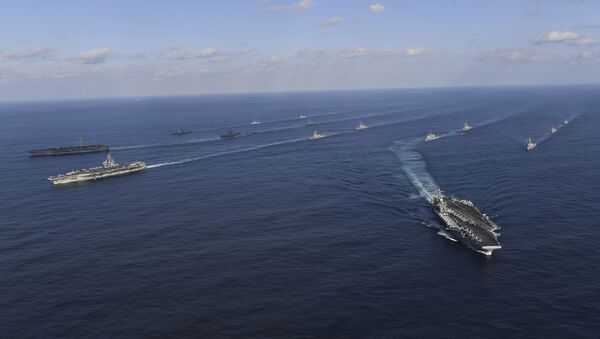 © AP Photo
Subscribe
International
India
Africa
MOSCOW (Sputnik) - The United States is moving its USS Nimitz aircraft carrier and other warships into the Persian Gulf to support the withdrawal of troops from Iraq and Afghanistan, CNN reported on Saturday, adding that the decision was made before the assassination of Iranian nuclear physicist Mohsen Fakhrizadeh.

The broadcaster is citing an unnamed US defence official, who confirmed that the move was decided before the report about the killing of Fakhrizadeh but would still serve as a message to Tehran.

The Iranian Defense Ministry said on Friday that the head of its research and innovation centre, Fakhrizadeh, had been killed. Earlier on Saturday, Iranian President Hassan Rouhani accused Israel of being behind the killing of the nuclear physicist, while Iran’s Ambassador to the United Nations Majid Takht Ravanchi has warned the US and Israel against "adventuristic" steps.

Earlier in November, Acting Defence Secretary Christopher Miller has announced plans to reduce by 15 January the number of US troops in Afghanistan and Iraq to 2,500 in each country. In addition, White House National Security Adviser Robert O'Brien has said that US President Donald Trump expected to bring all the remaining forces from the two countries by May.