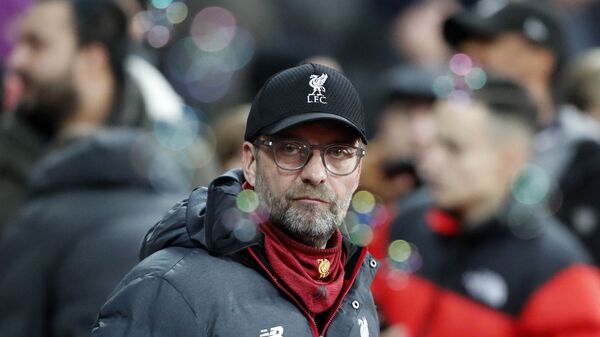 James Baillie
All materialsWrite to the author
The Liverpool manager was talking to BT Sport after his side's 1-1 Premier League draw at Brighton. Klopp spoke again about the need for Premier League teams to be allowed to make five substitutions and was very critical of Sheffield United boss Chris Wilder for blocking the rule change.

Reds boss Klopp targeted the Premier League’s broadcasters over their match scheduling in a spiky interview immediately after he saw his Liverpool side denied victory after a stoppage-time VAR intervention led to a penalty for the home side.

To make matters worse for the German, Klopp’s already threadbare playing squad was further depleted when Liverpool midfielder James Milner was forced off the field with what appeared to be a hamstring problem.

Klopp was then involved in a heated exchange with BT Sport presenter Des Kelly over scheduling and the early kick-off.

The Liverpool supremo pointed out that the early start to matches on Saturdays, coming on the heels of crucial midweek Champions League ties, was contributing to too many player injuries.

"After Wednesday, Saturday at 12:30 is really dangerous for the players," Klopp added.

"We have one more Wednesday and Saturday 12:30 before new year. These are difficult moments. If you play at 15:00 or 17:30 it's exactly the same [from a TV point of view]. I'm not having a go at the broadcasters, I'm just saying how it is," Klopp continued.

Social media reaction to the exchange was divided.

England legend Gary Lineker agreed with Kelly and said that Klopp had picked the wrong target.

Absolutely. That’s the job of the Premier League. I sympathise with Klopp but he’s picked the wrong target. https://t.co/guVgqKheTI

​But others noted that Klopp had made the very same points about the fixture schedule after the Reds beat Leicester 3-0 last week.

1) He didn’t lose the match

2) He gave the same interview after beating Leicester last week

Other Liverpool fans just seemed happy to see their side return to the top of the Premier League without playing very well and called for unity.

Don’t have a melt down @LFC we got lucky with the first penalty, looked tired and I don’t think deserve to win. We win together, draw together and lose together. 💪

​As the interview with Kelly continued, Klopp went on to criticise Sheffield United manager Chris Wilder for opposing a rule change that would allow sides to field five substitutes instead of just three currently - a move Klopp believes would limit player injuries.

"This world is ruled by other people, the Premier League by Chris Wilder because he can decide all of us don't need five subs because he doesn't," Klopp added.

Again, Klopp divided social media, with many fans suggesting that Klopp was right to stand up for his players.

I support #Klopp comments. Wilder is selfish! From a #THFC fans perspective, we need to see clubs who are playing in Europe protected. No early KO's nominate that to the teams out of Europe! We need 5 subs,as European clubs are being protected, which gives an advatng in UEFA Cmps

​But others said Klopp should call and apologise to Wilder for calling him selfish, as Liverpool has a better choice of subs to choose from than Wilder has at Sheffield United.

Disrespectful from #Klopp. Hope he calls Chris Wilder to apologise. Not very club has a bench full of £multi-million internationals to pick from.

"From time to time I try to mention a few things which are a problem but not now because… oh I did it already because he wanted to have that interview and we had it," he told BBC Sports' Match of the Day program.

"It's silly enough to fall into that trap and now he has the headlines he wanted," the German added.