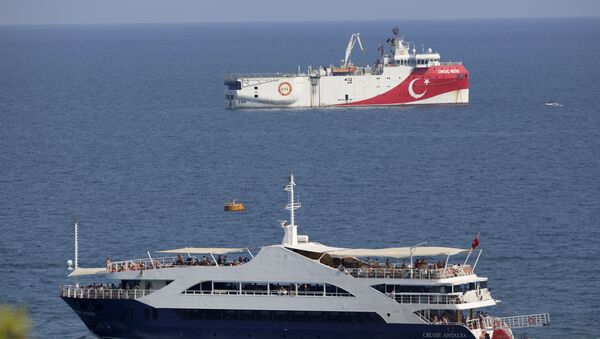 "The EU should definitively apply sanctions, and not only discuss them in the corridors, with clear Council Conclusions during the EU Summit on 10-11 December", Papadimoulis said, adding that "it is highly likely, if there is no concrete reaction by the EU, that Turkey will continue its aggressive tactics".

The lawmaker opined that sanctions on Turkey were long due, given that Erdogan has remained unresponsive to all previous warnings by Brussels and continued the policy of "unilateral provocations, against EU member-states, mainly Greece and Cyprus, in violation of international law and territorial rights and jeopardising regional peace and stability."

Specifying what sort of sanctions he believes would be most efficient, Papadimoulis listed restrictions on energy, trade, specific persons, companies and banks, adding that "even an arms embargo should be on the table."

The European Parliament vice president thinks that Erdogan has sought to divide-and-rule the EU, exploiting the differences among member states, while pursuing his own agendas with the Islamic world, the Middle East and Eastern Mediterranean.

Papadimoulis' opinion is that sanctions would be a way for the EU to send a "crystal clear message" that it stands in unity with member states and, at the same time, that Turkey would be welcomed if it reverses to a constructive regional policy, respect for human rights and necessary reforms.