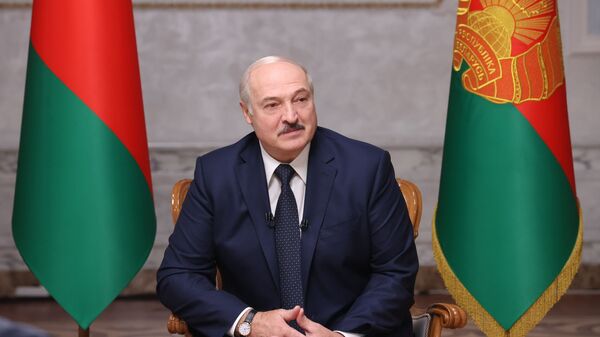 © Press service of the President of the Republic Belarus
/
Go to the mediabank
Subscribe
International
India
Africa
Ilya Tsukanov
All materialsWrite to the author
Earlier, the Belarusian president said he would not rule out early presidential elections after referendum-approved changes to the country's basic law. Minsk announced plans to amend the constitution in the wake of large-scale protests which followed the 9 August election, which saw Alexander Lukashenko reelected for a sixth consecutive term.

Belarusian President Alexander Lukashenko has indicated that he will not stay on as president once amendments are made to the country's constitution.

"I am a proponent of the new constitution. Not because we need some 'democracy'. Democracy is not the point. In this situation I am concerned about something else: we cannot give this constitution to a president who is an unknown. That would be a disaster," Lukashenko added, pointing to the major powers granted to the president under the existing basic law.

"We need to create a new constitution, but it should benefit the country. I don't want the country to fall into ruin down the line," Lukashenko stressed, adding that he would never allow the referendum on an amended constitution, or the elections that follow it, to be falsified, even if the results weren't to his liking. "Why? Because the Belarusian people need to go through what they need to go through. Better now, without a war. It would be worse if someone dropped this war on us."

Belarus to Impose Sanctions on High-Ranking EU Officials, Foreign Minister States
As for Belarus's pro-western opposition, which has been trying to topple the government since the 9 August elections, Lukashenko suggested that it would prefer the constitution and concentration of presidential powers to stay as they are today, presumably to make it easier to carry out radical or unpopular reforms.

Lukashenko has been president of Belarus for 26 years, serving out five consecutive terms and recently winning a sixth. Svetlana Tikhanovskaya, leader of Belarus's consolidated opposition, has accused Lukashenko of stealing the election from her, and alleged that opposition polling showed that she won the vote by a wide margin. From her self-imposed exile in Lithuania, Tikhanovskaya has demanded that Lukashenko step down and begin the process of 'handing over power'. The Belarusian president has rejected these calls, and has accused the opposition of being heavily supported by Western powers' intelligence services, the European Union and NATO. He has also warned that the ongoing spate of street protests could escalate into a civil war, and lead Poland to swallow up part of the country.

At the same time, Lukashenko promised constitutional reforms, but has stressed that he would not be forced out of office by a minority in the streets.

The EU slapped sanctions on 40 Belarusian officials in October, and has since expanded the list to include Lukashenko himself. Belarus later retaliated via personal sanctions against EU leaders.