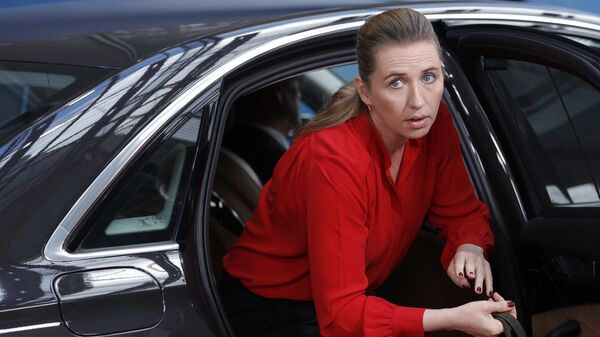 © AP Photo / Geoffroy van der Hasselt / Pool
Subscribe
International
India
Africa
Igor Kuznetsov
All materials
Despite having called the mass cull of over 15 million mink “non-negotiable”, Frederiksen denies having given an explicit “order” to kill the nation's entire stock and maintains that the responsibility for the killing without a legal basis rests with the former Food Minister, his party comrade Mogens Jensen, who subsequently resigned.

Danish Prime Minister Mette Frederiksen had tears in her eyes when she met the press after a visit to a mink farm near Kolding.

“We have two generations of really skilled mink breeders, father and son, who in a very short time have had their life's work destroyed. It is important to say that it is not their fault, the coronavirus is to blame that the profession cannot continue,” Frederiksen told the newspaper Berlingske as she wiped tears from the corner of her eye.

In the courtyard, she also issued an apology for the tumultuous weeks that have led to the mink industry actually being closed down in Denmark.

“We talked about many things during the visit, but I did not use that word,” Frederiksen said about the hour-long conversation with mink breeder Peter Hindbo and his son. “I think there is reason to apologise for the process. Mistakes have been made, and you must be able to both regret and apologise,” Frederiksen added.

Still, she contended that the decision to cull all of Denmark's farmed mink was necessary for the sake of public health. “Nothing has changed”, Frederiksen said.

The Prime Minister's visit to the mink farm came after several dramatic weeks, during which the government has been the focal point of an agricultural crisis which quickly became political.

Following the discovery of a mutated coronavirus across Danish mink farms, the government announced that all of the mink in Europe's largest mink fur exporting nation would be killed for safety reasons. The mutation had already spread to humans and threatened to interfere with the vaccination process.

However, subsequently, it turned out that the decision to cull all the animals, including the healthy ones, had no legal basis. Notwithstanding the legal issues and popular protests, the government mustered the necessary support to go on with its plan.

Frederiksen herself denied having given an explicit “order” to kill the entire mink stock of over 15 million animals and maintained that the responsibility for the killing without a legal basis rests with the former Food Minister, her party comrade Mogens Jensen, who subsequently resigned. However, at the press conference on 4 November, Frederiksen stated that the minks “must” be killed and called the decision “non-negotiable”. At the same press conference, it was made clear that the Armed Forces, the Danish Emergency Agency and the police would be deployed, while National Police Chief Thorkild Fogde stated that the killing should take place “as soon as possible”.

On social media, the reaction to Frederiksen's tearful apology was a harsh one. Many maintained that her performance was insincere and accused the Prime Minister of shedding “crocodile tears”.

“Does the government think the people are idiots? There is so much spin that even the most loyal Social Democratic party soldier can not believe this,” the newspaper Ekstra Bladet's political commentator Joachin Olsen argued.

​“Really well-made designer drug. And it undoubtedly works even better than any kind of vaccine,” another user chimed in.

​“Disgusting to look at. And she who complained about the Americanisation of Danish politics,” another one mused.

​“As expected. She could even squeeze a tear for the camera. Embarrassingly manipulative behaviour to gain sympathy despite of the consequences of her own decision,” another one tweeted.

And the Oscar goes to...

​The ongoing cull and the subsequent ban on mink farming until 1 January 2022 has effectively wiped out an entire industry in a nation that has been among the world's leaders for several decades. Before the cull, Denmark used to be the largest player in the production of mink, with over 29 percent of the market and a turnover of about $800 million in 2019.