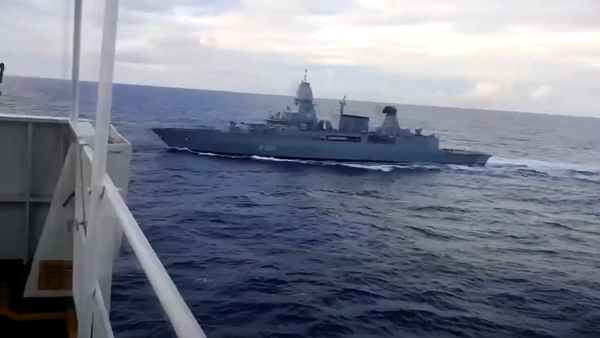 © Sputnik / YouTube / Sputnik Greece
Subscribe
Ilya Tsukanov
All materialsWrite to the author
Germany and other European nations have suspected Ankara of violating the United Nations Security Council’s arms embargo against civil-war-torn Libya. On Monday, German authorities confirmed that an attempted inspection of a Turkish-flagged cargo ship bound for the North African nation was stopped following a vocal protest by Turkish authorities.

The Ankara Prosecutor’s Office has initiated an investigation in connection with the November 22 incident involving the halting and attempted search of the Roseline-A, a Turkish-flagged commercial cargo vessel, by a German warship, Sputnik Turkey has reported.

No further details about the investigation have been provided.

The 16,000 tonne Roseline-A container freighter was stopped by the German Navy frigate Hamburg about 200 km north off the coast of the Libyan city of Benghazi on Sunday evening and boarded by commandos, who proceeded to search the vessel under the auspices of the European Union’s Operation IRINI anti-smuggling mission to enforce a UN arms embargo on Libya.

Commandos are said to have stopped their inspection after a vocal protest by Ankara, which accused the German forces of violating international law and said the cargo ship was carrying only humanitarian aid.

The German side indicated that it had sent a formal request for permission to board, but received no reply for over four hours, assuming implicit permission to board. Turkish Foreign Ministry spokesman Hami Aksoy later indicated that the troops boarded despite being informed about the ship’s cargo and course. Aksoy stressed that Turkey would “retain the right to seek compensation.”

Commenting on the search, the German Defence Ministry indicated that it had found no prohibited material onboard the vessel in the time that its forces were on the ship.

The incident involving the Roseline-A is at least the second of its kind. In June, NATO started a formal probe after France complained that one of its warships had been placed in the crosshairs of Turkish anti-ship missiles after attempting to inspect a Turkish cargo ship suspected of delivering arms to Libya. Ankara dismissed Paris’s allegations as “false” and demanded an “unconditional apology.”

Before the EU began Operation IRINI in late March, Turkey openly admitted to sending both military equipment and troops to help prop up the Tripoli-based Government of National Accord (GNA) in its fight against the Tobruk-based House of Representatives and the Libyan National Army (LNA), led by General Khalifa Haftar. The GNA and the LNA consolidated control over wide swathes of Libya over the past several years, and have since waged a brutal civil war for control of the country. The war in Libya started in 2011, after NATO forces carried out a campaign of airstrikes in the country to help rebels overthrow longtime Libyan leader Muammar Gaddafi, and turned the North African country into a failed state. 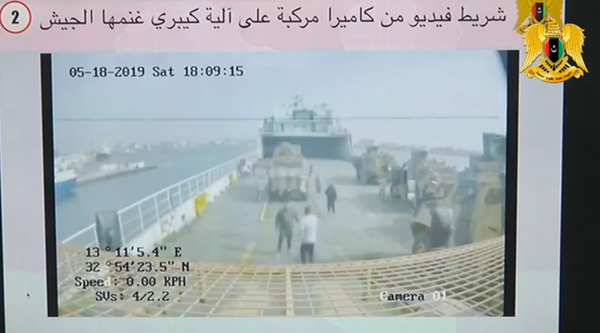 Footage from interior of Turkish vehicle allegedly being shipped to Libya from presentation by the Libyan National Army on the extent of Ankara's involvement in the Libyan war.
© Photo : Screenshot from LNA presentation.

The Roseline-A incident is part of a broader pattern of spats between Ankara and Brussels. Last week, Berlin warned that the EU may slap sanctions on Turkey over its ‘provocative’ gas drilling in disputed waters in the Eastern Mediterranean. Before that, in mid-November, Turkish President Recep Tayyip Erdogan visited the self-proclaimed Republic of Northern Cyprus, prompting complaints from Nicosia, which is a EU member, and causing EU foreign policy chief Josep Borrell to accuse Turkey of “widening its separation” from the bloc.

Turkish Presidency Reportedly Submits Motion on Sending Troops to Azerbaijan
Turkey has multiple conflicts with other neighbours as well, illegally deploying troops to Syria, providing military support to Azerbaijan in the latest flare-up of fighting in the disputed Nagorno-Karabakh, and becoming engaged in a maritime dispute with Greece and Egypt.
Newsfeed
0
New firstOld first
loader
LIVE
Заголовок открываемого материала
Access to the chat has been blocked for violating the rules . You will be able to participate again through:∞. If you do not agree with the blocking, please use the feedback form
The discussion is closed. You can participate in the discussion within 24 hours after the publication of the article.
To participate in the discussion
log in or register
loader
Chats
Заголовок открываемого материала
Worldwide
InternationalEnglishEnglishMundoEspañolSpanish
Europe
DeutschlandDeutschGermanFranceFrançaisFrenchΕλλάδαΕλληνικάGreekItaliaItalianoItalianČeská republikaČeštinaCzechPolskaPolskiPolishСрбиjаСрпскиSerbianLatvijaLatviešuLatvianLietuvaLietuviųLithuanianMoldovaMoldoveneascăMoldavianБеларусьБеларускiBelarusian
Transcaucasia
ԱրմենիաՀայերենArmenianАҧсныАҧсышәалаAbkhazХуссар ИрыстонИронауОssetianსაქართველოქართულიGeorgianAzərbaycanАzərbaycancaAzerbaijani
Middle East
Sputnik عربيArabicArabicTürkiyeTürkçeTurkishSputnik ایرانPersianPersianSputnik افغانستانDariDari
Central Asia
ҚазақстанҚазақ тіліKazakhКыргызстанКыргызчаKyrgyzOʻzbekistonЎзбекчаUzbekТоҷикистонТоҷикӣTajik
East & Southeast Asia
Việt NamTiếng ViệtVietnamese日本日本語Japanese中国中文Chinese
South America
BrasilPortuguêsPortuguese