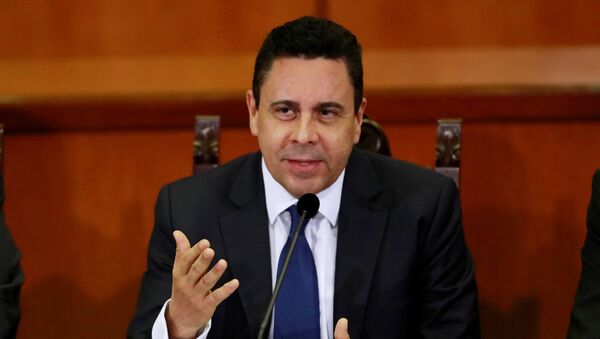 James Tweedie
All materialsWrite to the author
Venezuelan UN envoy Samuel Moncada has called for cooperation between the 29 nations currently under unilateral US sanctions to "mitigate" their effects - just as Iran, Russia and Cuba have helped his country in the past.

Venezuela's ambassador to the United Nations has advocated for the creation of a global pact to undermine unilateral sanctions imposed by Washington.

Addressing the UN Security Council on Wednesday via videolink, Samuel Moncada proposed three concrete actions, starting with the establishment of an "international alliance against unilateral coercive measures" which would serve as "an operational platform to mitigate their negative impact".

​He also called for redoubled efforts towards a UN General Assembly declaration to promote the lifting of all sanctions, and for the UNSC to regularly address the threat that such measures pose to "international peace and security".

Moncada denounced the US' imposition of sanctions on 29 UN member states, "contravening the UN charter and the norms of international law, threatening international peace and violating the human rights of over one-third of humanity, including 30 million Venezuelans."

He stressed how the US uses its economic power to coerce other nations into enforcing its unilateral sanctions.

"The pursuit of naked self-interest by criminal means is compounded by the weaponisation of the worst pandemic suffered by humanity in a century," the representative added. "These illegal measures have been deliberately increased this year, undermining national efforts to control the disease."

"All countries suffering from this type of aggression inflicted by economic means must cooperate to put an end to the suffering of our peoples," Moncada insisted.

Venezuela Expects First Deliveries of Russian Sputnik V Vaccine in January
Iran's UN envoy Majid Takht Ravanchi echoed Moncada's comments, saying: "Contrary to the statements of some Western countries, there are no smart sanctions or exceptions for food, medicine, and other humanitarian items."

Iranian ships reportedly defied a US embargo to deliver much-needed petrol and chemicals to refine Venezuela's plentiful oil this year, while Russia has previously helped alleviate food shortages with bulk deliveries of grain, and Cuba - under US blockade since 1960 - has sent volunteer doctors to treat the country's poorest for two decades.

US sanctions against Venezuela for alleged violations of human rights and election-rigging were successively ramped up by the administrations of George W Bush, Barack Obama and Donald Trump, all of whom supported failed coup attempts against socialist President Nicolas Maduro and his late predecessor Hugo Chávez. Trump's government slapped an embargo on key oil imports from the South American nation and seized the assets of national oil company PDVSA's US subsidiary Citgo.

000000
Popular comments
UN , you have final spoken up , sanctions done by America have been used as a tool to destroy Nations , Iran and Venezuela for example . Massive compensation must be included as Venezuela , once a rich oil nation has now been downgraded to the level of an undeveloped Nation where residents starve or migrate to Columbia . America has tried to assassinate the President Maduro more than once . Iran is in the same situation .

Richard Martin
27 November 2020, 01:29 GMT8
000000
Hear hear Samuel let the global world stand in unison against these barbaric US and EU sanctions that in a year of a catastrophic virus is the greatest human rights violations since Hitler's rise to power.