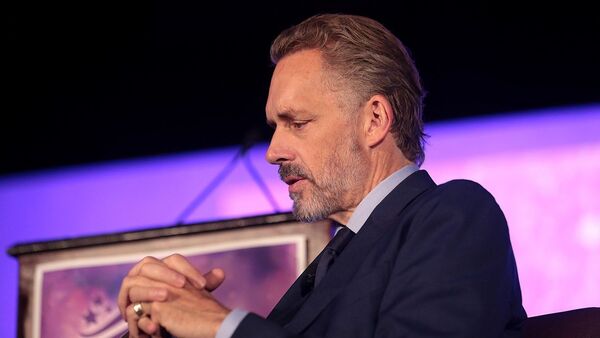 Aleksandra Serebriakova
Sputnik correspondent specializing in foreign affairs.
All materialsWrite to the author
Clinical psychologist and public speaking guru Jordan Peterson has now returned to Canada to resume work following an illness, touting the release of his new book "Beyond Order: 12 More Rules for Life". His publisher Penguin Random House Canada on Monday announced that the book will hit shelves in March.

News about the upcoming publication of Jordan Peterson's book was apparently met with protests, anonymous complaints, and even tears from the staff at the psychologist's publisher Penguin Random House Canada (PRH Canada), Vice revealed on Tuesday, citing insights from anonymous sources at the organisation.

According to the report, the company's decision to publish the book by the University of Toronto professor, dubbed by one LGBTQ staffer as "an icon of hate speech and transphobia", was highly criticised during a town hall held by the publisher on Monday to defend its decision to put out Peterson's new work.

One insider told Vice that during the meeting some employees were even "crying", explaining how Jordan Peterson's previous work has "affected their lives". According to another staffer, at least 70 complaints have so far been received by the publisher's diversity and inclusion committee over PRH Canada's decision to continue working with Peterson.

PRH Canada confirmed the news that they held a meeting to discuss the upcoming publication and maintained that they "remain committed to publishing a range of voices and viewpoints".

"We announced yesterday that we will publish Jordan Peterson's new book Beyond Order this coming March. Immediately following the announcement, we held a forum and provided a space for our employees to express their views and offer feedback. Our employees have started an anonymous feedback channel, which we fully support. We are open to hearing our employees' feedback and answering all of their questions", the company said in an emailed statement.

The report about PRH Canada staffers breaking down in tears over the news of the publication of her father's book received a strong reaction from the professor's daughter and aide, Mikhaila Peterson. She shared the article on Twitter, accompanying it with tongue-in-cheek advice on "how to improve business in 2 steps".

“... staff CRIED and expressed dismay with the decision to publish 'Beyond Order: 12 More Rules for Life.'”

Jordan Peterson did not comment on the controversy, but shared his daughter's tweet advertising the upcoming book, linking the Vice article. According to some of Peterson's followers, the report made them want to read his "12 Rules for Life" series even more.

That makes me want to order it

Which made me buy it right away

Jordan Peterson, who recently recovered from a grave condition caused by his physical addiction to the benzodiazepine prescribed to treat anxiety, rocketed to international fame back in 2016 after he publicly criticised a piece of Canadian legislation mandating that citizens use gender-neutral pronouns for non-binary people. For some the professor remains an odious figure, while for other's he is an iconic critic of overreaching political correctness and defender of freedom of speech.

Last year, Cambridge University rescinded its visiting fellowship offer to Peterson following a backlash from some faculty members, a decision that was strongly condemned by the academic himself and his devoted listeners.