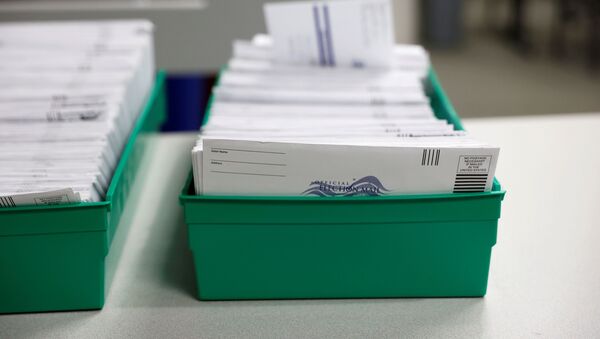 Asya Geydarova
Editor
All materialsWrite to the author
While Pennsylvania officials announced Democrat Joe Biden as the winner of the presidential race in the state on Tuesday, US President Donald Trump has sought to overturn the results, accusing Democrats of election fraud and irregularities.

Pennsylvania Judge Patricia McCullough has ruled that the state must halt "further action" on certification of the 2020 election results and set a hearing on Friday.

"To the extent that there remains any further action to perfect the certification of the results of the 2020 General Election ... for the office of President and Vice President of the United States of America, Respondents are preliminarily enjoined from doing so, pending an evidentiary hearing", the rulling said on Wednesday.

"Big news!", Trump wrote on Twitter following the announcement. Earlier, in a phone call to the public hearings in Pennsylvania, the US president said that he has all evidence required to reclaim election victory and just needs a neutral judge to listen properly to his arguments.

"We have to turn the election over. There is no doubt we have all the evidence, we have all the affidavits, we have everything", Trump said. "All we need is to have some judge listen to it properly without having a political opinion or another kind of a problem."

At the same time, Pennsylvania Attorney General Josh Shapiro said the decision by the state court does not impact the certification of the results, which was done on Tuesday. According to the final tally from the Pennsylvania secretary of state, Biden defeated President Donald Trump by 80,555 votes in the battleground state.

This order does not impact yesterday’s appointment of electors. We will be filing an appeal with the Pennsylvania Supreme Court momentarily. https://t.co/wRzFwPvJIO

The Trump administration has formally greenlighted the process of power transfer to Biden after the General Services Administrator (GSA) notified the former vice president that the transition could officially begin. So far, at least four US states have officially certified Biden as their winner, these include Pennsylvania, Nevada, Michigan, and Georgia.

At the same time, the incumbent US president will not concede to what he says is "election fraud" and has vowed to continue his legal battle to ensure all ballots cast in this presidential election are legitimate.