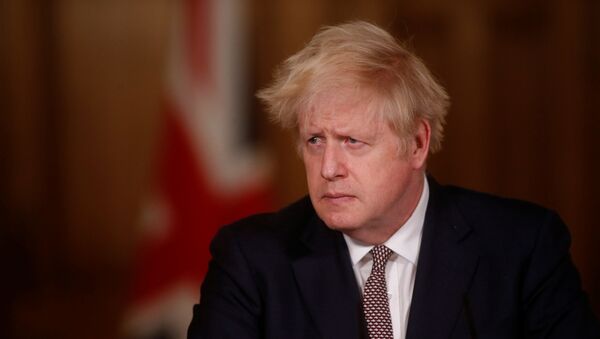 James Tweedie
All materialsWrite to the author
Boris Johnson said mass community testing for coronavirus in Liverpool - aided by some 2,000 army personnel - had helped drive down the infection there, and would soon be offered to the four-tenths of the country under the new tier-three restrictions.

British Prime Minister Boris Johnson has warned of a "hard winter" before mass testing and vaccination win the war against COVID-19.

And the PM said the army would be deployed across the country to help in "community testing," which he credited with cutting infection rates in the city of Liverpool by two-thirds.

Speaking at his first live Downing Street press conference since emerging from self-isolation, Johnson was optimistic that the two-pronged offensive would "combine to end this era of restrictions."

"But to get there we must first navigate a hard winter when the burden on our NHS is heaviest," he warned, with almost all of the country now under stricter tier two and three alert levels.

"If we ease off now we risk losing control of the virus all over again" and face another nationwide lockdown in the new year, Johnson said, insisting "the tough measures in our winter plan are the best way to avoid this outcome."

Johnson apologised for the "tough" new restrictions under all levels of the three-tiered system that England will return to after the national lockdown ends on December 2. But the PM compared the tiered system favourably to harsher lockdown measures in Italy, Germany and France, and said the previous tiered system, which lasted just a few weeks in October, had failed to get the overall reproduction, or R-rate, of the virus down below the key value of one.

Only Cornwall, the Scilly Isles and the Isle of Wight will be in the lowest tier of restrictions, while 40 per cent of the country is at the strictest tier-3 level.

No Hugs on Christmas

Johnson insisted that "Your tier is not your destiny, every area has the means of escape," promising that restrictions would be eased as infection rates and the burden on the National Health Service fell.

But that optimism was not echoed by his chief scientific and medical officers, who also spoke at the press conference.

Chief Medical Officer Professor Chris Whitty said tier-one restrictions had been able to "slow things down but did not stop the rise anywhere", while tier two had been just enough to "hold the line" and only tier three was able to "pull things down".

Johnson said that with the army's help, 240,000 coronavirus tests had been carried out in Liverpool in just two-and-a-half weeks - which had helped cut the number of cases there by two-thirds. He said a third of infected people showed no symptoms of the disease but could still be spreaders.

And he pledged that with more help from the army, "community testing" would be offered to other tier-three areas.

Sky's Beth Rigby pointed out that 2,000 personnel had to be sent to Liverpool to help with the testing programme there. She asked if the entire army would have to be deployed to keep Johnson's promise of mass testing in the four-tenths of the country under tier three.

Johnson was evasive on the number of troops needed, but stressed that "it will also take local leadership and local communities coming together," adding: "we will make sure we have adequate personnel to get it done."

UK Prime Minister Says Three-Tiered System Best Way to Avoid Spike in COVID-19 Cases
Whitty also warned against complacency during the five-day relaxation of restrictions over Christmas, which he said he would spend on hospital wards.

"Would I encourage someone to hug and kiss elderly relatives? No, I would not," he said, adding they would rather live to be hugged again in future. Chief Scientific Officer Sir Patrick Vallance also warned that "hugging elderly relatives is not something to do."