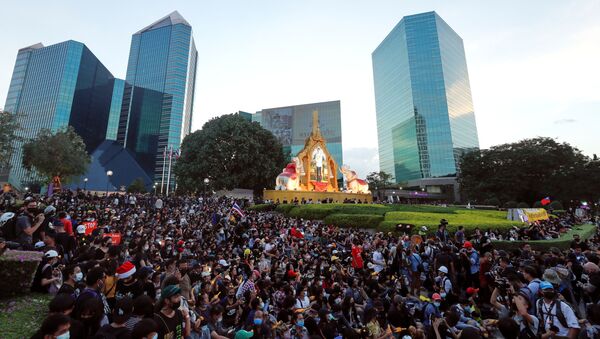 Thailand has been swept by numerous protests sparked by discontent over the monarchy in the country and its current constitution.

Sputnik is live from outside the Crown Property Bureau in Bangkok as demonstrators assemble to demand that the ruling monarch, King Maha Vajiralongkorn, transfer personal control over the royal fortune. The royal assets are managed by the Crown Propery Bureau, whose governors are appointed directly by the monarch - currently the richest king on the planet and known for his lavish lifestyle.

Protests in Thailand have been underway since the contested 2019 general election, with demonstrators demanding the resignation of Prime Minister Prayut Chan-o-cha, who came to power after staging a military coup in 2014. Among other demands is a change of the constitution as well as reform of the monarchy.