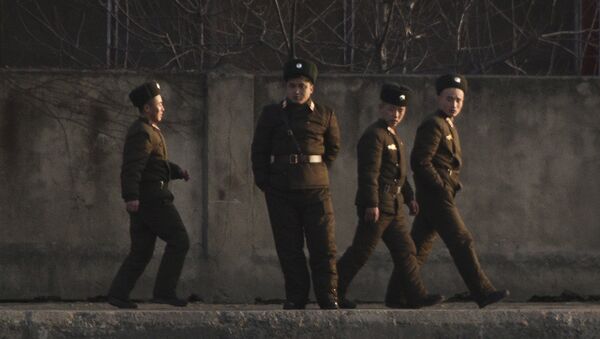 Nikita Folomov
All materialsWrite to the author
Ever since the division of the Korean Peninsula in 1953, people from North Korea have been untertaking attempts to cross the border and defect to territory controlled by Seoul.

A North Korean man, who vaulted a three-metre border wall without triggering defence sensors in a bid to escape to South Korea earlier this month, has been identified as a professional gymnast. The revelation came during an investigation into the incident, South Korean media quoted military officials as saying on Monday.

After the South Korean border guards discovered a breach, the man was tracked down and detained. The unnamed man submitted peacefully and asked for asylum. The authorities then kicked off an investigation into the breach of a hi-tech security system, trying to understand the reason it had failed to detect the border jumper.

As the incident was revealed by the media, South Korean military officials were criticised for letting people cross the border with very few obstacles. The public also expressed concerns over a potential North Korean infiltration, according to The Korea Herald.

Following the end of the Korean War in 1953, a new border line was established to separate the two countries. The so-called "Military Demarcation Line" crossed the 38th parallel, from the southwest to the northeast, and was surrounded by a Demilitarised Zone (DMZ).

In the 1990s, after the collapse of the USSR, North Korea survived a sharp decline in exports, leading to an economic crisis. As foreign humanitarian aid to the country ended due to Pyongyang's refusal to shut down its nuclear programme, the country suffered a devastating famine, resulting in massive loss of life.

According to statistics, around 33,000 people have escaped from North Korea since the famine outbreak in the early 90s. Civilians, senior military leaders, and politicians are among those who have left the North.