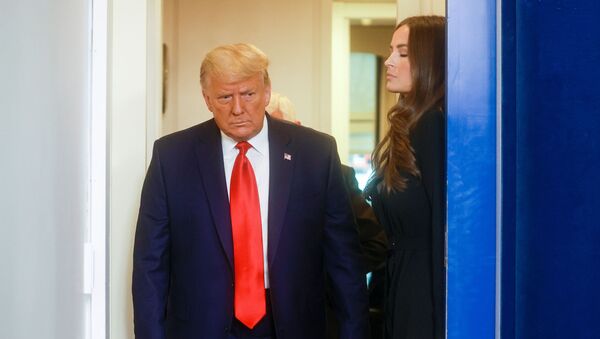 Oleg Burunov
All materialsWrite to the author
On Tuesday, POTUS tweeted that his legal team is still pursuing numerous cases in order to prove that the 3 November race for the Oval Office was "the most corrupt election in American political history".

US President Donald Trump would win the Republican presidential nomination in 2024 if he decided to run for the presidency again, a new poll has revealed.

The survey, which was conducted by the US news outlet Politico and the global privately held data intelligence company Morning Consult, found POTUS had the support of 53% of GOP respondents and Republican-leaning independents.

Twelve percent of them signalled their preference for Vice President Mike Pence, while the president's eldest son, Donald Trump Jr., came third with 8%, according to the poll.

With many respondents perceiving Trump as the Republican nominee for the 2024 presidency, the survey separately revealed that at least 45% of Republicans "strongly" disapprove of the president's current job performance.

The poll came after a survey conducted by the company Seven Letter Insight showed that 66% of Republican voters want Trump to run for re-election in the 2024 presidential election, while another 38% would like the president to "refuse to give up power and remain in the White House".

When asked whether Trump should "contest the election in the [US] Supreme Court", 63% of GOP respondents agreed with the statement, as did 40% of surveyed independents.

Although POTUS' re-election campaign has filed several lawsuits contesting the results in several battleground states, many of the challenges have been rejected, and most recently a federal judge in Pennsylvania dismissed a lawsuit that sought to block the Keystone State's certification of ballots.

Both polls were released after Trump on Monday endorsed a move by the General Services Administration (GSA) to start the US presidential transition process, but made it clear once again that he is not going to concede defeat to Joe Biden in the 3 November election.

Biden Says Trump Administration's Outreach on Transition Process Has Been 'Sincere'
The president stressed in a tweet that he will never admit to defeat in what he described as "fake ballots" and "Dominion", referring to the Dominion Voting Systems Corporation, a company that he has repeatedly accused of being responsible for its vote-tallying machine software erroneously "flipping" votes to Democrats.

Biden has, meanwhile, outlined a spate of key priorities for his first 100 days in office, stressing that solving some of them would depend on "the kind of cooperation" he "can or cannot get from the United States Congress".