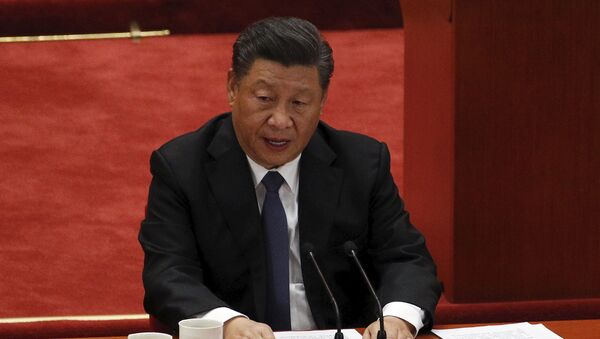 Nikita Folomov
All materialsWrite to the author
Under the Trump administration, US-China relations have been locked in political and trade disputes. Over the last four years, the US has put protectionist tariffs on Chinese imports, pledged to develop relations with Taiwan and challenged the Chinese Communist Party in the wake of the protests in Hong Kong.

Chairman of the People’s Republic of China (PRC) Xi Jinping congratulated Joe Biden on his projected win in the 2020 US presidential election. In his message, Xi stressed that China and the US have to develop healthy and sustainable relations between their countries, Chinese Central Television (CCTV) quoted the chairman as saying.

“The China-US relations should meet interests of the two nations, as well as represent expectations of the international community”, he added.

The chairmen of the Chinese Communist Party expressed hope that the two countries would preserve the spirit of non-confrontation, mutual respect and win-win cooperation for the common future. Working in cooperation with other countries in order to promote world peace and development was also highlighted by the Chinese leader as one of the top priorities.

Earlier today, the PRC Vice President Wang Qishan sent a message of congratulations to Kamala Harris on her projected election as the US vice-president.

US-China relations have been consistently worsening since 2016. Trump branded China a "currency manipulator” during the 2016 presidential campaign and promised to to "bring back jobs from Beijing".

In March, Trump signed a memorandum under Section 301 of the Trade Act of 1974 imposing tariffs of $50 billion on Chinese goods, including steel and aluminum. Trump said the tariffs had to be introduced due to China's alleged theft of US intellectual property. The resulting report stated that Trump’s decision would cost the US economy around $225 billion and $600 billion annually. The Chinese government responded to Trump's action by imposing tariffs on $3 billion worth of US-produced goods.

In 2018, Washington launched a series of campaigns against Chinese technology giants Huawei and ByteDance. Trump’s administration accused Chinese companies of collecting personal data and allegedly threatening national security. The situation intensified when a New York court issued an arrest warrant for Meng Wanzhou, chief executive of Huawei, who was charged with conspiracies to commit bank and wire fraud. She was later arrested in Canada and the battle over her extradition continues.

Washington and Beijing were set to resolve their trade disputes in 2020, having managed to agree on Phase One of a trade deal, which included strengthening protection and enforcement of intellectual property rights in China. Under the agreement, China also committed to purchase $200 billion of American-made goods and services over the course of 2020 and 2021.

In the time since the Covid pandemic began, the Trump administration has pledged to deepen ties with Taiwan, considering it to be an independent nation, while Beijing has repeatedly claimed the island as an inseparable part of its territory.  In October, the US approved arms sales to Taiwan worth around $1.8 billion. Beijing has said the deal would likely have a major impact on the relations between the US and China.

Meanwhile, the two countries keep escalating their rhetoric in the wake of newly-formed disputes. As China has been trying to fully implement the National Security Law in Hong Kong while preventing possible protests as some of the legislators resigned, the US threatened China with political and legal consequences. On Thursday, the US national security advisor Robert O’Brien warned China that violating its international commitments would lead the US to impose sanctions on people responsible for “extinguishing Hong Kong’s freedom”.

On Wednesday, the US media reported that the Trump administration had identified 89 Chinese companies as having ties with the Chinese military, and thus restricted them from access to US technologies.