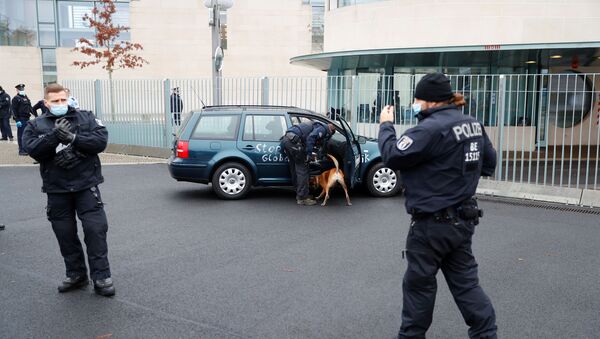 Henry Batyaev
All materialsWrite to the author
The incident comes as the German chancellor was holding a virtual meeting with German state premiers to discuss steps to deal with the ongoing coronavirus pandemic.

The police have detained a 54-year-old man who crashed into the gate of Chancellor Angela Merkel's office in Berlin, the city's law enforcement forces said Wednesday. The incident is currently under investigation to establish whether the man's actions were intentional, the police stated. According to dpa news, one person was injured in the incident.

"The information we have at the moment suggests that the car was moving very slowly so the damage to the gate and the car is not very serious. The motives, whether it is because of the mental state or other motives, are being checked", the police representative said.

A German interior ministry spokesman said on Wednesday that the detained person had been on the radar of the Berlin authorities as he was involved in a similar incident dating back to 2014.

Photos and videos depicting the situation outside the Chancellery have emerged on Twitter in which a black vehicle with the inscription "You d*mn killers of children and old people" is seen at the gate of Merkel's office. There is no apparent damage to either the gate or the car.

According to photos by social media users, the other side of the car is inscribed with the phrase "Stop Globalisation Politics".

The measures introduced by the government have been met with opposition by some Berliners who today flocked in front of the Bundestag to condemn the said regulations.

Protests have been ongoing in Berlin as citizens see the government's measures to stave off the spread of the coronavirus as a violation of their rights.

Some of the public actions turned violent, forcing the police to detain protesters and disperse the crowds with a water cannon.