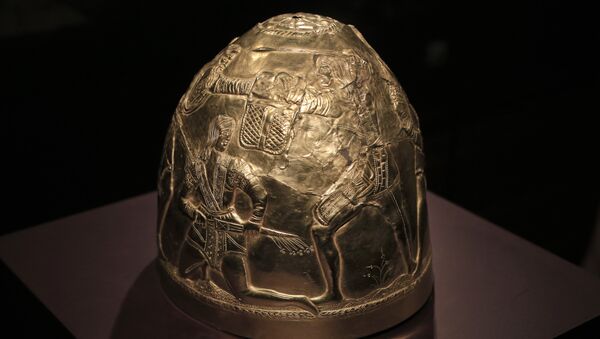 © AP Photo / Peter Dejong
Subscribe
International
India
Africa
The Amsterdam Court of Appeal previously postponed a final verdict in the Russian-Ukrainian row over the collection of Scythian gold and tasked the sides with providing additional information.

MOSCOW, (Sputnik) - The Amsterdam court of appeal has appointed a new judge in the Scythian gold case, so the dispute around the ownership of Crimean artifacts will be heard by three judges, spokeswoman Marjemme van Poelgeest told Sputnik.

In late October, the court approved Ukraine's demand for the recusal of judge Duco Oranje.

According to van Poelgeest, the sides have been informed about the new appointment and have been asked to submit their written proposals regarding further proceedings by December 8.

The dispute concerns a Scythian art collection from four Crimean museums that was on loan for an exhibition in Amsterdam in February 2014. A month later, Crimea reunified with Russia. The Dutch museum that was temporarily hosting the collection would have to decide whether to return it to Ukraine or Crimea. The museum said it would hold on to the artworks until either Ukraine and Crimea reached an agreement or the court ruled on the case. The museum did return the part of the collection that had come from a museum in Kiev.

A Dutch court ruled in December 2016 that Ukraine should get the gold collection. Crimea challenged the judgment and replaced its legal team. The court reached an interim decision in July 2019 against Ukraine invoking the 1970 UNESCO convention on illicit trafficking of cultural property and asked both sides of the dispute to present additional information so that it could make the final judgment.