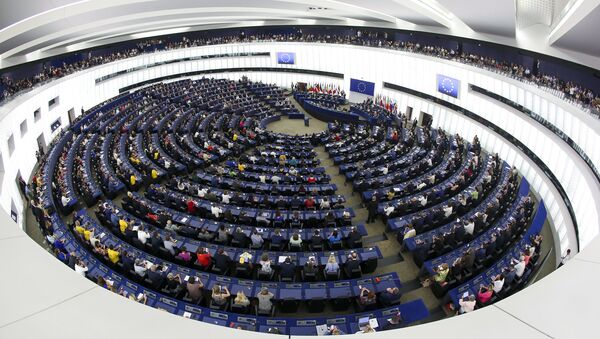 Mohamed Elmaazi
All materialsWrite to the author
There is a battle in the halls of the European parliament to ensure that the latest report on fundamental rights references the US prosecution and attempted extradition of WikiLeaks founder and publisher Julian Assange.

The EU's parliament will be voting on its latest report on fundamental rights, which also encompasses media freedom. The report on fundamental freedoms for 2018 - 2019 originally mentioned the detention and prosecution of Mr Assange as setting a "dangerous precedent for journalists as affirmed by the Parliamentary Assembly of the Council of Europe". But a committee of EU parliamentarians removed the passage.

Clare Daly, an MEP from Ireland and the rapporteur for the annual fundamental rights report, proposed an amendment to re-insert the wording into the final report.

Here is the text of #AssangeAmendment44, recognising the Assange case as a fundamental rights concern, and enhancing the language on whistleblowers.

Urge your MEPs to support it tomorrow when it is voted in the plenary session of the @Europarl_EN pic.twitter.com/0MKIPMVBTB

​Ms Daly then made a public call for citizens of the European Union to urge their respective parliamentary representatives to support the amendment.

Assange supporters: we need your help!

As rapporteur, I tabled amendment 44 to put #Assange back in the text.

Write to your MEPs and urge them to please support #AssangeAmendment44 tomorrow pic.twitter.com/kQBKtusasx

"Holding powerful vested interests to account, will be incredibly difficult, if not impossible if the spurious case against Assange isn't defeated", former Labour MP Chris Williamson told Sputnik. "That is why I believe Clare Daly's efforts to ensure the European Parliament includes a reference to him in the text of the report on fundamental rights is absolutely essential", he added.

"The Julian Assange Defence Committee supports Clare Daley’s amendment. In defending Julian Assange we defend ourselves. Behind the cruel walls of Belmarsh Prison in the UK, there is a man who embodies press freedom" Emmy Butlin said, in advance of the vote.

Ms Butlin added that "The UK no longer has MEPs but if you are from an EU country please write to your MEP and ask them to vote in support of the plenary amendment #AssangeAmendment44 . Let your voice and your will be heard and felt in the assembly of the European parliament".

Mr Assange remains in Belmarsh maximum-security prison as he awaits the decision of Judge Vanessa Baraitser on whether he should be extradited to the United States to face charges under the 1917 Espionage Act. The charges against the award-wining publisher primarily focus on his and WikiLeaks' role in publishing classified US documents, which revealed war crimes, crimes against humanity and other forms of corruption and malfeasance.

Judge Baraitser's decision is scheduled to be handed down on 4 January 2021, although both the prosecution and defence have the possibility of appealing to the High Court and then the UK Supreme Court.