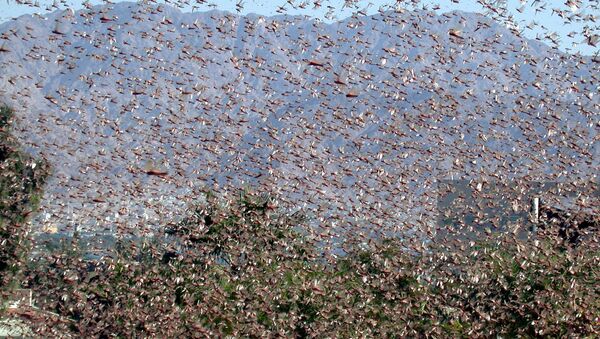 Morgan Artyukhina
All materialsWrite to the author
Amid a new armed conflict and subsequent refugee crisis in East Africa, a new batch of locust swarms has arisen, even further threatening the food security of millions of people.

For the third time this year, swarms of hungry grasshoppers are invading eastern Africa, endangering food supplies in a region where famine is always perilously close and a new civil war is beginning to unfold.

On Friday, the United Nations’ Food and Agriculture Organization (FAO) sounded the alert that swarms were again on the move across the region, threatening crops in Sudan, South Sudan, Ethiopia, Eritrea, Djibouti, Yemen, Somalia, Kenya and Tanzania.

"Breeding continues in central Somalia and eastern Ethiopia where hopper bands are present, and a new generation of immature swarms will start forming by the end of this month. Swarm formation will continue throughout December because of widespread hatching and band formation that occurred this past week," the FAO wrote. The group noted that strong northeasterly winds are carrying the flying insects further than normal.

“From the second week of December onwards, several waves of numerous swarms can be expected to move south in Somalia and Ethiopia, reaching northern Kenya," the FAO added.

As expected, several small mature swarmlets from Somalia moved to Kenya and a few may reach NE Tanzania this weekend.

​Video and photos from the area show the ground covered in millions of brown grasshoppers driven into a swarming phase by a combination of weather and crowding, and cropland shredded by their ravenous collective hunger.

Billions of locust swarms through many East African countries.

But when they hit war-torn countries like #Somalia, the impact is catastrophic for millions.. numbers never seen in 25 years.

Update: Latest photos coming from Cadaado show how #DeserLocust damaged crops and farmland in Cadaado. So far, it's not clear the level of impacts caused by the locust to the pasture & crops as no initial joint assessment in #Galmudug till now.
Photos by @SaidAynte #Somalia pic.twitter.com/nY2Mgv2SLK

Swarms of locust could be seen tonight hopping inside the houses in Adado district in Galgaduud region, it was only late last year when vast swarms of locust which have caused extensive damage to the crops and the other natural vegetation have invaded South & Central #Somalia pic.twitter.com/HlaCKUMVjp

Etienne Peterschmitt, the FAO’s representative in Somalia, told Xinhua News Agency on Saturday the organization’s efforts to track and inhibit the ravenous grasshopper swarms had also been majorly stepped up.

“These resources include aircraft, vehicles, equipment, biopesticides, insect growth regulators and staff that have been strategically positioned in various parts of the country,” he said in a statement.

Somali Minister of Agriculture and Irrigation Said Hussein Iid told Xinhua that the increase in locust swarms was the worst the country had seen in decades.

“However, since this protracted crisis started in December 2019, Somalia’s capacity to respond has been strengthened thanks to concerted efforts by the government and FAO,” he said.

According to Africa News, even a small swarm of locusts can eat as much grain in a day as 35,000 people could. In a prior locust period between January and April, swarms destroyed 1.3 million hectares of grazing land and nearly 200,000 hectares of crops, resulting in the loss of 350,000 tons of cereals.

The risk of famine is palpable. From 2020 to 2012, more than 260,000 people died in Somalia amid a severe drought said to be the worst in more than half a century and a civil war against the al-Qaeda-aligned terrorist group al-Shabaab. In Yemen, the UN World Food Program has categorized more than 20 million Yemenis as food insecure, with almost one-third of families suffering food gaps in their diet amid an unrelenting Saudi-led war to destroy the Shiite Houthi movement.

War in Ethiopia has also created a new refugee crisis, with tens of thousands fleeing the Tigray region into neighboring Sudan, crowding into refugee camps that are quickly becoming overwhelmed and short on supplies. The UN has said it expects as many as 200,000 refugees will cross the border in the next six months. Some 80% of the population of Tigray are subsistence farmers.

Meanwhile, researchers are working on new methods to predict where locust outbreaks will happen next. Scientists at the International Center of Insect Physiology and Ecology believe that new computer models developed by observing swarms and the conditions that give rise to them can help farmers and governments to better target their prevention efforts in areas before they hatch into locust swarms, according to a Sunday report by Science Times.