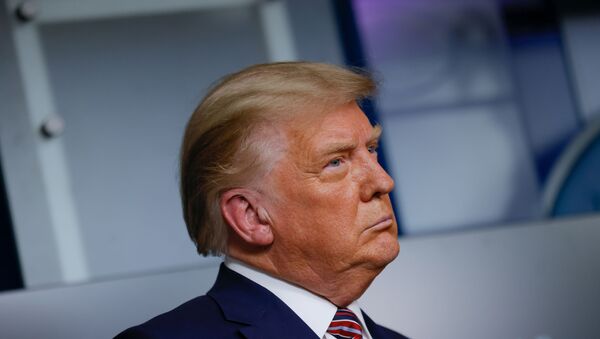 Asya Geydarova
Editor
All materialsWrite to the author
WASHINGTON(Sputnik) - The Pennsylvania Supreme Court has rejected the Trump campaign's lawsuit to invalidate 8,329 mail-in ballots in Philadelphia, a court filing revealed.

On Saturday, US District Judge Matthew Brann rejected a Trump campaign lawsuit seeking to invalidate mail-in ballots in Pennsylvania. According to Trump's team, 682,777 ballots were cast illegally in the state.

"Guided by these principles and for the reasons discussed at length in this opinion, we conclude that the Election Code does not require boards of elections to disqualify mail-in or absentee ballots submitted by qualified electors who signed the declaration on their ballot's outer envelope but did not handwrite their name, their address, and/or date, where no fraud or irregularity has been alleged", the court said on Monday.

US media networks have projected Democratic presidential nominee Joe Biden to be the winner of the 3 November presidential election. However, President Donald Trump has said he won the election but victory has been stolen from him via massive fraud and acts of impropriety that he says has been witnessed in several battleground states, including Pennsylvania.

Other than politics, how do you lose a case where large numbers of voters, far more than you need to flip Pennsylvania, are disenfranchised? Vote Observers thrown out of counting rooms. People going to vote finding out they have already voted through a fake ballot - go home!

Trump has sought recounts in several states and filed lawsuits in state and federal court, saying only legal votes should be counted and illegal votes should be discarded. His team vowed on Monday to continue its legal battle to ensure all votes cast in the election are legitimate.