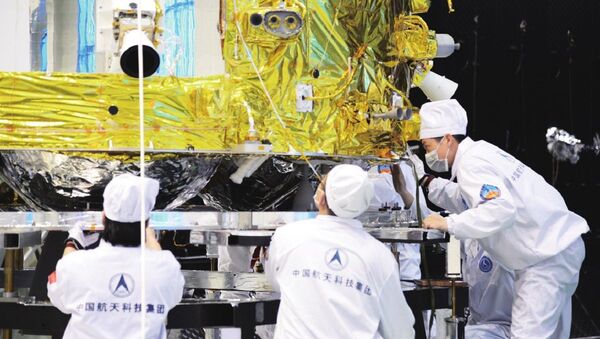 WENCHANG (Sputnik) - A Chinese heavy-lift Chang Zheng 5 launch vehicle with a Chang'e 5 return vehicle, which is planned to land on the Moon, collect samples of lunar soil, and return with them to Earth, was launched from the cosmodrome at Hainan, a Sputnik correspondent reported.

Earlier, a Sputnik correspondent reported that the Chang’e 5 lunar mission was successfully launched from the Wenchang Spacecraft Launch Center in Wenchang, in China’s Hainan island province. The launch took place at 04:30 local time on Tuesday (20:30 GMT on Monday).

"The Chang Zheng 5 carrier rocket launched from Wenchang successfully put the Chang’e 5 lunar research vehicle into the designated orbit after about 2,200 seconds of flight," the CNSA said after the launch.

Pei Zhaoyu, deputy director of the Lunar Exploration and Space Program Center of the China National Space Administration (CNSA) told journalists that in what concerns China’s lunar exploration, China sets its own scientific and engineering goals but adheres "to the goals of peaceful development."

If fully successful, the Chang'e 5 mission will be the first lunar sample return mission to be completed since 1976, when the Soviet Union carried out the Luna 24 robotic probe mission to the Moon.

"After receiving lunar soil samples, we will disclose to the international community how to handle the regolith samples and will conduct research in accordance with that," the spokesperson told journalists.

The Chang'e 5 probe was originally set to be launched at the end of November 2017, but due to failure of the Chang Zheng 5 launch vehicle in July 2017, the mission had to be postponed. It was delayed again in 2019. The Chang’e 5 lunar mission is China’s first-ever sample return mission. ​