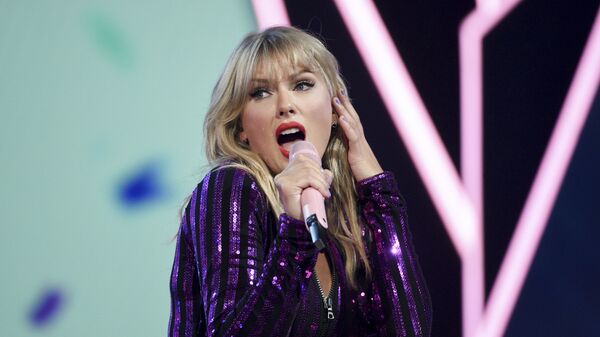 Radhika Parashar
All materialsWrite to the author
The red carpet of the highly-anticipated American Music Awards (AMAs) glittered bright as several stars from the music industry arrived at the Microsoft Theatre in Los Angeles on Sunday night. Justin Bieber, Shawn Mendes, The Weeknd, and Meghan Thee Stallion were among other music sensations whose presence marked the AMAs.

While the American Music Awards was filled with fun moments and surprises, pop princess Taylor Swift, who won the "Artist of the Year" for the sixth time emerged as one of the most talked about highlights from the star-studded show.

This year, Swift bagged the "Artist of the Year" award for the third consecutive time.

Taylor Swift in Hot Water as Her Song Used in Democratic Political Ad
The 30-year-old pop star, however, was not present to receive her award. In a video message, Swift revealed that she had been in the studio, re-recording some albums that she first made with her former label – Big Machine Records.

In 2019, an infuriated Swift accused Big Machine Records of selling her master recordings to Scooter Braun, the manager of top artists including Ariana Grande and Justin Bieber. Since then, Swift has been working on re-recording her songs, delayed due the pandemic.

As soon as the official Twitter handle of the AMAs posted the announcement on Twitter, fans from around the world began pouring barrels full of love on the "Love Story" singer. Although there were several fans rooting for Bieber, Swift's fans celebrated her victory with hearty applause.

BIG congratulations to @taylorswift13! Shes taking home the award for Artist of the Year! #AMAs pic.twitter.com/XfBOTPU5Nc

no, he isn't. Cry about it pic.twitter.com/AZcy8cCPWY

🏆 | Taylor Swift extends her all time record at the @AMAs as the most awarded artist in the shows HISTORY with 32 awards after winning three more tonight! #AMAs pic.twitter.com/e833wPtBmv

​The "End Game" singer also won awards in two other categories – Favourite Female Artist Pop/Rock and Favourite Music Video for "Cardigan" – taking her total number of AMAs to a historic 32.

The video message from Swift, who dropped her last album "Folklore" in July 2020, expressing gratitude to her fans while virtually accepting her awards has also gone viral on social media:

Congratulations to Taylor for winning 3 AMAs, the Artist of the Year, Favorite Female Artist Pop/Rock and Favorite Music Video for cardigan! I’m so proud of you Tay!💛 #TaylorSwift pic.twitter.com/5KWAEwpVoJ

​Other music stars including South Korean boy band BTS, Justin Bieber, and The Weeknd also took home awards in different categories. The American Music Awards were first created by Dick Clark in 1973 for ABC to compensate for losing the rights to air the Grammys.