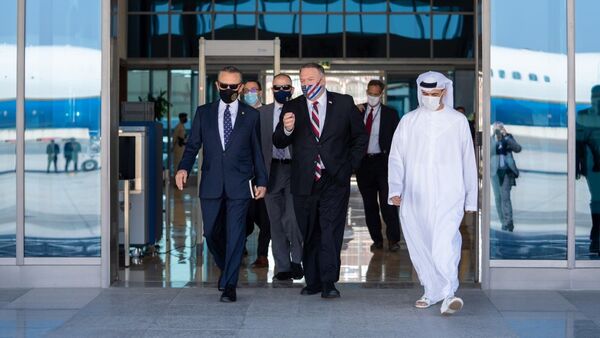 Ilya Tsukanov
All materialsWrite to the author
This fall, the US brokered normalisation-of-relations deals between Israel and the United Arab Emirates, Bahrain and Sudan, offering Abu Dhabi lucrative weapons contracts, and promising Khartoum that Washington would lift sanctions and the ‘state sponsor of terrorism’ designation against the Northeast African nation.

There are still more Arab countries that the US believes are willing to normalise ties with Israel, Secretary of State Mike Pompeo has said.

“I am very confident that other nations will join what the Emiratis, Bahrainis, and Sudanese have done and recognise the rightful place of Israel among nations,” the US top diplomat said, speaking to the Dubai-based Saudi-owned al-Arabiya television channel in an interview released Sunday.

“They’ll do it because it’s the right thing to do for their nation, because of increased prosperity and security for their country,” Pompeo added, without elaborating which countries he had in mind.

According to the secretary of state, the “common threat from Iran” has helped bring the Gulf States and Israel together.

Regarding the Israeli recognition deals, Pompeo reiterated that “every country that wants a better situation for their people will come along to recognise Israel.” The secretary also criticised Palestinian leaders’ rejection of the Trump peace plan, saying Washington “would love for the Palestinians to engage with Israel.”

Pompeo paid a whirlwind multi-state visit to the Middle East this week, demonstratively touring a Jewish settlement in the occupied West Bank and stopping by in the Israeli-occupied Syrian Golan Heights, and going on to visit the UAE, Qatar and Saudi Arabia in a trip expected to wrap up on Monday.

The Trump administration unveiled its ‘Peace to Prosperity’ plan for resolving the 72-year-old Israeli-Palestinian conflict in January, calling for a two-state solution, recognition of Israeli claims to settlements in the West Bank, Israeli sovereignty over the Jordan Valley, and recognition of Jerusalem as the country’s capital. For the Palestinian side, the plan proposes a $50 billion fund for infrastructure and investment, as well as neighbourhoods in East Jerusalem for a Palestinian capital. Palestinian officials denounced the plan, with Palestinian Authority President Mahmoud Abbas saying Jerusalem was “not for sale” and that the proposal as a whole belongs in the “garbage can of history".

Palestinian Authority Allegedly Sends Envoys Who Were Recalled Over Israel Deal Back to UAE, Bahrain
Palestinian leaders have also attacked the UAE and Bahrain for ‘betraying’ Palestinians and ‘stabbing them in the back’ by signing normalisation deals with Israel. Israeli Prime Minister Benjamin Netanyahu dismissed these criticisms, saying the Gulf sheikdoms’ decision was a sign that some Arab countries would no longer be “held hostage by the Palestinians.”

Soon after the normalisation deal between Israel, the UAE and Bahrain was signed in September, it was revealed that the United States planned to sweeten the deal by offering Abu Dhabi a $23 billion arms sales agreement including as many as 50 F-35 Joint Strike Fighters, 18 MQ-9B Reaper drones and a slew of missiles and munitions.

Sudan, which agreed to normalise ties with Tel Aviv a month later, received promises of sanctions relief and a commitment by Washington that the state sponsor of terrorism designation slapped on Khartoum in 1993 would be gradually lifted.

The UAE, Bahrain and Sudan became the third, fourth and fifth members of the Arab League to normalise ties with Israel, with Egypt doing so in in 1979 and Jordan following suit in 1994. 17 League members continue to have no ties with the Jewish state. Saudi Arabia, the largest of the Arab Gulf states, has recently indicated that it would not agree to normalise ties with Israel absent the implementation of the 2002 Arab Peace Initiative proposal for resolving the Arab-Israeli conflict. 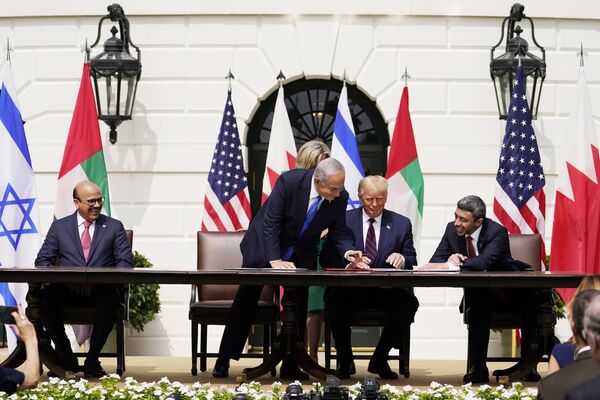 President Donald Trump, center, with from left, Bahrain Foreign Minister Khalid bin Ahmed Al Khalifa, Israeli Prime Minister Benjamin Netanyahu, Trump, and United Arab Emirates Foreign Minister Abdullah bin Zayed al-Nahyan, during the Abraham Accords signing ceremony on the South Lawn of the White House, Tuesday, Sept. 15, 2020, in Washington. (AP Photo/Alex Brandon)
© AP Photo / Alex Brandon
Newsfeed
0
Access to the chat has been blocked for violating the rules . You will be able to participate again through:∞. If you do not agree with the blocking, please use the feedback form
The discussion is closed. You can participate in the discussion within 24 hours after the publication of the article.
To participate in the discussion
log in or register
loader
Chats
Заголовок открываемого материала