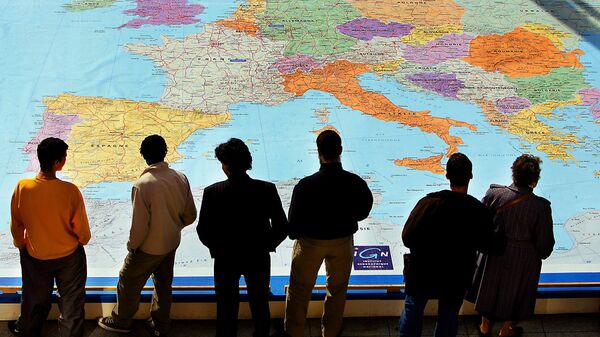 Svetlana Ekimenko
All materialsWrite to the author
European politicians have long been debating the contentious issue of creating their own army, independent of the United States and NATO, with Paris particularly enthusiastic about the idea, and Berlin expressing scepticism. Though the subject of heated discussion, the issue has yet to move beyond debate.

In early November, in response to criticism from French President Emmanuel Macron, German Defense Minister Annegret Kramp-Karrenbauer repeated her insistence that Europe must continue to rely on US security guarantees, citing “sobering facts”.

Kramp-Karrenbauer found herself in a heated exchange with the French leader after he levelled criticisms at her in an interview with Le Grand Continent over an op-ed in POLITICO on 2 November.

In the latter, the German minister argued that “Europe still needs America". She also argued that “illusions of European strategic autonomy must come to an end” because “Europeans will not be able to replace America’s crucial role as a security provider". 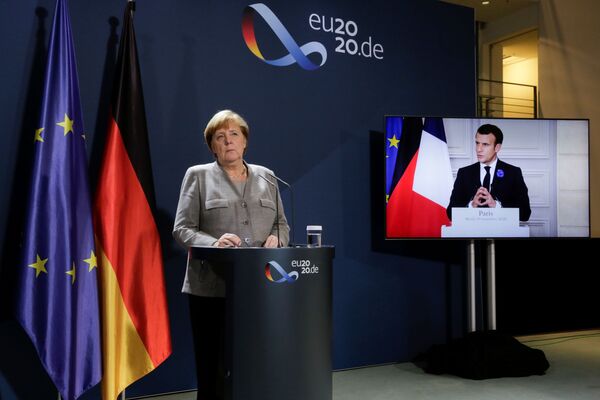 The French president immediately responded by saying he “profoundly” disagrees with Kramp-Karrenbauer’s position. Macron described her argument as “a historical misinterpretation,” and went so far as to claim that ssthe German Chancellor Angela Merkel didn’t share this stance, either.

“The United States will only respect us as allies if we are serious about our own position, and if we have our own sovereignty regarding our defence,” said Macron, who earlier, in 2019, warned European countries that they can no longer rely on America to defend its NATO allies.

“What we are currently experiencing is the brain death of NATO,” Macron said in a blunt interview with The Economist at the time, later explaining that he intended his words to be a "wake-up call" for alliance members.

This is not the first time the French leader has raised the issue of a European army. In 2018, on the eve of the anniversary of the end of the First World War, he highlighted the benefits of creating a common European army.

Two long-time allies such as France and America should treat each other with respect, said Macron, and France was a US ally but not a “vassal state”.

Emmanuel Macron suggests building its own army to protect Europe against the U.S., China and Russia. But it was Germany in World Wars One & Two - How did that work out for France? They were starting to learn German in Paris before the U.S. came along. Pay for NATO or not!

The statements came after US President Donald Trump attacked the French leader on Twitter in the wake of his visit to France, blasting the key US ally over a number of issues, including bringing up the idea of a European army.

“The United States are our historic ally and will continue to be. It’s the ally with which we take all the risks, with which we carry out the most complicated operations. But being an ally doesn’t mean being a vassal state,” Macron said.

The idea of a European army is not new. Five years ago, Jean-Claude Juncker, who was then president of the European Commission, shared his opinion with Welt am Sonntag that the EU needs an army to face up to “threats”, as well as to restore the bloc’s standing around the world.

Arguing at the time that NATO was not enough as not all members of the transatlantic defence alliance are in the EU, Juncker insisted a common EU army would send important signals to the world.

The idea of a European army, however, was not met with understanding in the UK.

The United Kingdom's Secretary of State for Defence at the time, Sir Michael Fallon, categorically stated in 2016 that "this will not happen".

At a meeting of EU defence ministers in Bratislava, Fallon said it was up to NATO, not the EU, to defend Europe.

Berlin has regarded the idea of a European army in a more positive light. As German defence minister, Ursula von der Leyen, currently President of the European Commission, pushed for greater security co-operation in the EU, urging a “defence union” and calling for the establishment of an “army of Europeans.”

President of the #EU_Commission #Ursula_von_der_Leyen at Davos 2020 wants a strong European Defence Union and matching army that can operate at complementary level of NATO/EU defence. Today’s world threats affecting the EU demands an effective functional army/change of politics! pic.twitter.com/5YP3UtKGMt

“In the end, there will be a European army,” said Bartels in 2017, underscoring that eventually the EU will be organised and eliminate “disorganised, technically fragmented, and duplicate structures."

"The European countries spend enormous sums on the military, many times more in total when compared with Russia. Yet our military capabilities remain unsatisfactory from a security standpoint. And they will for as long as we're talking about national mini-armies, which are often doing and purchasing the same things in their miniature formats," said Röttgen.

However, recently the mood has changed in Berlin. On 18 November Kramp-Karrenbauer gave a keynote speech at the University of the German Federal Armed Forces in the northern city of Hamburg to announce that Germany and Europe "cannot protect themselves" without the US.

“The idea of Europe's strategic autonomy goes too far if it fosters the illusion that we can guarantee security, stability and prosperity in Europe without NATO and without the US," she said, adding:

"Without America's nuclear and conventional capabilities, Germany and Europe cannot protect themselves. Those are the plain facts.”

Referring to the outcome of the 2020 presidential election in the US, she argued that although Germany and Europe should take on more responsibility, the possible change of administration in Washington might provide new opportunities as well as new challenges.

“We want Europe to be a strong partner for the United States on an equal footing and not a protégé in need of help,” she added.

The issue of a common, supranational EU army remains in the realm of talks among European allies, as they look to the US and the developments unfolding in the wake of the 2020 presidential election, of which American media has projected Democrat Joe Biden to be the winner despite incumbent Republican Donald Trump’s team launching lawsuits to contest the outcome, crying "fraud".