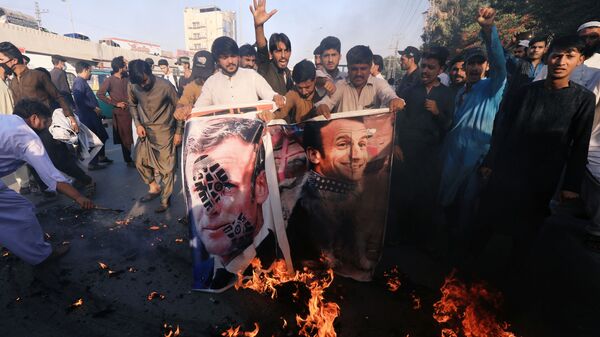 Svetlana Ekimenko
All materialsWrite to the author
France’s President Emmanuel Macron earlier added fuel to growing tensions within the country by presenting the French Council of the Muslim Faith (CFCM) with a “charter of republican values” ultimatum as part of his broad clampdown on “radical Islam” within France.

Mazari went on Twitter to liken Macron’s clampdown on “radical Islam” within French society to what “the Nazis did to the Jews”.

Macron is doing to Muslims what the Nazis did to the Jews - Muslim children will get ID numbers (other children won't) just as Jews were forced to wear the yellow star on their clothing for identification. https://t.co/YdP2L3flJS

The irate outburst of the Pakistani official came after the French President asked the French Council of the Muslim Faith (CFCM), an organisation comprised of the country’s top Muslim leaders, to accept a “charter of republican values” as part of his fight against so-called “radical Islam” within France. A 15-day ultimatum was given to accept the new charter.

Commenting on the tweet, a spokesperson for the French Foreign Ministry said on Saturday that Pakistan should engage in dialogue based on respect.

"A member of the Pakistani government spoke today on social networks in deeply shocking and insulting terms towards the President of the Republic and our country," the spokesperson said, as quoted by Le Parisien newspaper, adding that "Pakistan must rectify these remarks."

Amid the French President's recent statements on Islam and moves to defend the right of the nation's citizens to draw cartoons of the Prophet Muhammad, an act deemed blasphemous by Muslims, Islamic communities in numerous countries have called for a boycott of French goods. 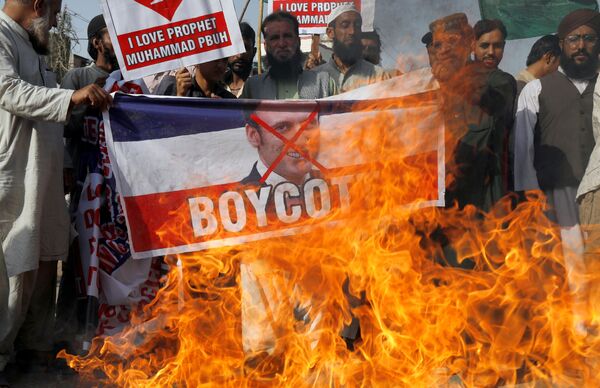 People chant slogans as they set fire to a banner with a crossed-out image of French President Emmanuel Macron during a protest against cartoon publications of Prophet Mohammad in France and Macron's comments, in Karachi, Pakistan October 27, 2020.
© REUTERS / AKHTAR SOOMRO

Pakistan itself condemned Macron's remarks and accused his country of conducting a "systematic Islamophobic campaign". Prime Minister Imran Khan even called on his countrymen to counter what he described as the "repression" of Muslims in Europe.

Some of the entrances into Islamabad were blocked off on the 16 November after a two-day anti-France rally in the neighbouring city of Rawalpindi threatened to spill over to the Pakistani capital, AFP reported. 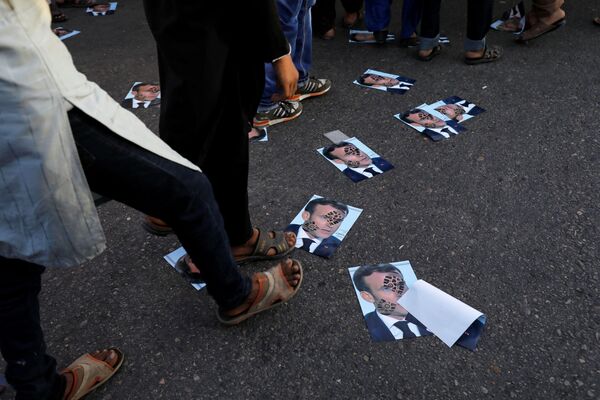 Supporter of Pakistan's religious and political party Jamaat-e-Islami (JI) step on photos of the French President Emmanuel Macron during a protest against the cartoon publications of Prophet Mohammad in France and Macron's comments, in Karachi, Pakistan October 28, 2020.
© REUTERS / AKHTAR SOOMRO

The protests had been organised by the party Tehreek-Labaik Pakistan (TLP), which takes a hardline stance on religious issues.

France embarked on a ramped up fight against radical Islamism and terrorism after a spate of recent religiously-motivated attacks that included beheadings in Nice and Paris.

Tensions first spiralled after the satirical magazine Charlie Hebdo republished cartoons in late September depicting the Prophet Muhammad amid the trial of 14 suspects involved in the deadly 2015 attack on the magazine.

French Lawmakers Call for Tough Action on Those Refusing to Assimilate, Fiche S Extremists
Muslims perceive depictions of the Islamic prophet as blasphemous and insulting. The beheading of history teacher Samuel Paty for showing his students the Charlie Hebdo cartoons, and a brutal assault on parishioners of the Basilica of Notre-Dame de Nice led President Macron to double down on his criticism of "radical Islam" and intolerance, while triggering a wave of protests in predominantly Muslim countries around the world.

On 2 October, Macron outlined a new law aimed at combating religious "separatism" and freeing Islam in France from "foreign influences", adding that Islam was "in crisis all over the world today".

In accordance with the new rules, all Islamic organisations receiving funding from the French state would be called upon to sign a "secular charter", and associations found to be propagating ideals contrary to those of the French republic will be ordered to disband.

More recently, on 18 November Macron asked Muslim leaders to agree to a "charter of republican values" as part of a broad clampdown on radical Islam, giving the French Council of the Muslim Faith (CFCM) 15 days to work with the interior ministry.

"Two principles will be inscribed in black and white [in the charter]: the rejection of political Islam and any foreign interference," reported Le Parisien newspaper.

The formation of the National Council of Imams was also agreed upon.

The measures adopted also include drafting a wide-ranging bill seeking to prevent radicalisation, incorporating measures such as restrictions on home-schooling, and giving children an identification number that would be used to ensure they are attending school, with parents who break the law facing up to six months in jail as well as large fines.

"We must save our children from the clutches of the Islamists," France’s interior minister Gerald Darmanin told the Le Figaro newspaper on Wednesday.

The draft law will be discussed by the French cabinet on 9 December.