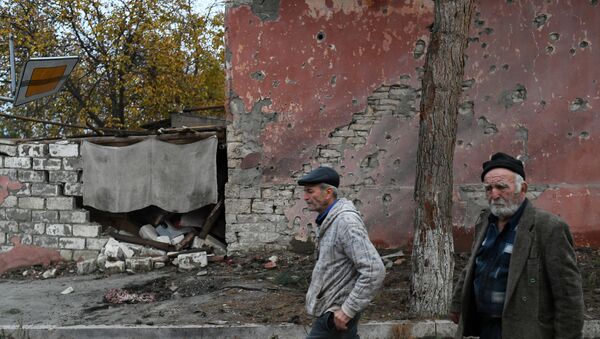 © Sputnik / Maxim Blinov
/
Go to the photo bank
Subscribe
YEREVAN (Sputnik) - As many as 25,000 refugees have already returned to their homes in Nagorno-Karabakh since the end of the recent hostilities, according to the region's official statistics, the president of the unrecognized republic, Arayik Harutyunyan, said on Sunday.

"The flow to Artsakh [Nagorno-Karabakh], the return of our compatriots is proceeding at a fairly fast pace. In just five days, 25,000 people returned, this is according to our registration center", Harutyunyan said during a meeting with Armenian Prime Minister Nikol Pashinyan.

According to the president of the unrecognised Nagorno-Karabakh Republic, refugees are still coming back. In particular, those who have places to live return at the first stage, the rest will return gradually so that there is an opportunity for accommodation and solving social problems. In addition, the response center in Yerevan will try to reimburse some costs of staying of Karabakh residents in Armenia and utility payments.

"There are, of course, problems related to roads and safety. We will discuss this," Harutyunyan added.

Pashinyan, in turn, pointed to the need to focus efforts on restoring normal life in Karabakh, ensuring the return of refugees and creating the necessary conditions for them.

The Armenian government earlier said it would allocate around $600 to residents of Nagorno-Karabakh settlements that are now under the control of Azerbaijan. In order to be eligible to receive the funds, people should have lived in the above mentioned areas for at least three months prior to 27 September - the day when the recent hostilities broke out, the government specified.

Under the agreement, Azerbaijan retains control of the territories it captured during the six-week conflict, while Russia is deploying peacekeepers along the line of contact of the warring parties and in the Lachin Corridor connecting Nagorno-Karabakh with Armenia. Armenia also agreed to hand over all the Azeri-majority buffer territories surrounding Nagorno-Karabakh which have been under its de facto control since 1994.

Earlier this week, Russian Foreign Minister Sergey Lavrov said that Moscow expected UN humanitarian bodies to join the effort of the International Committee of the Red Cross (ICRC) to tackle humanitarian problems in Karabakh, to preserve the local humanitarian heritage.

ICRC president Peter Maurer told Sputnik earlier this week that the committee was working diligently to ensure aid deliveries to displaced groups and facilitate the exchange of prisoners and the bodies of the deceased in Nagorno-Karabakh following the Russian-brokered ceasefire.