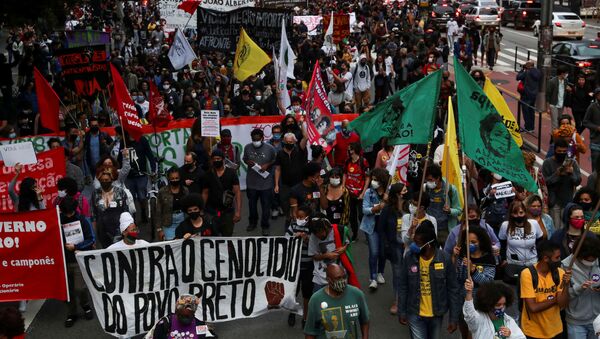 Violent protesters have rocked several Brazilian cities following the murder of a 40-year-old black man in a Carrefour shop in Porto Alegre committed on Thursday by two security guards, who, according to G1 news website, claimed that they had been punched by the man they killed.

Two guards, one a military police officer, were filmed beating to death a man later identified as João Alberto Silveira Freitas and then kneeling on his neck on the ground. Following the incident, the military officer, Giovani Gaspar da Silva, 24, was taken to a military prison, and Magno Braz Borges, 30, a store security guard, was sent to a Civil Police facility.

Shopping malls were vandalised by protesters, with windows smashed and goods thrown from the shelves to the ground.

Black Lives Matter is putting fire in Brazilian supermarkets like Carrefour. And who needs to extinguish the fire and risk their lifes? Black people!
Tugs! Wretches! Scoundrels! pic.twitter.com/fTRZhTgu4g

​​Angry protesters were pictured setting objects on fire in the street as well. 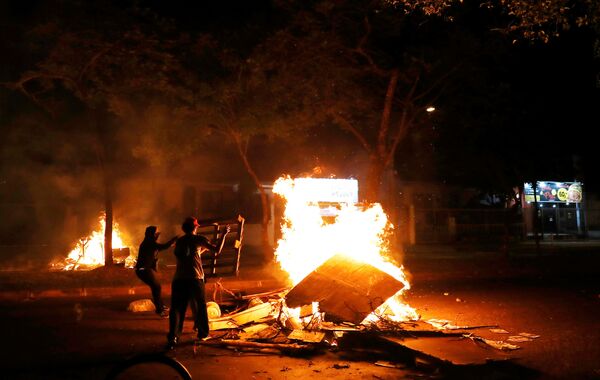 Demonstrators burn objects to block a street during a protest against racism, after Joao Alberto Silveira Freitas was beaten to death by security guards at a Carrefour supermarket in Porto Alegre, Brazil, November 20, 2020.
© REUTERS / DIEGO VARA 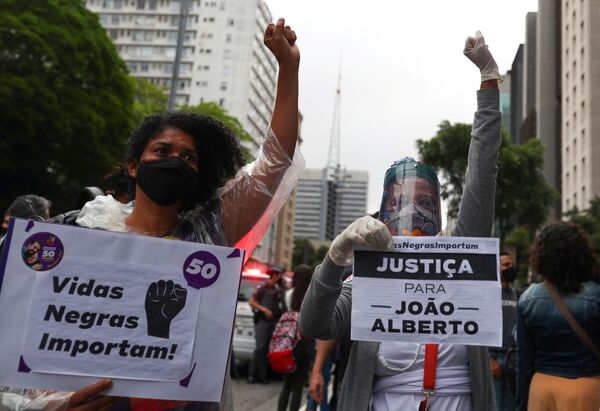 Demonstrators hold signs that read "Black Lives Matter" (L) and "Justice for Joao Alberto" during a march in Sao Paulo on National Black Consciousness Day and in protest against the death of Joao Alberto Silveira Freitas, a Black man beaten to death at a market in Porto Alegre, Brazil, November 20, 2020
© REUTERS / AMANDA PEROBELLI

Demonstrators demanded closing the stores of the French Carrefour retail company, protesting inside the supermarkets and shouting "Stop killing us".

Carrefour issued a statement regarding the tragic incident, saying that it had launched an internal investigation and expressing regret over the killing.

"Carrefour informs that it will adopt the appropriate measures to hold those involved in this criminal act responsible. It will also break the contract with the company that is responsible for the security guards who committed the aggression", a company statement read, cited by G1. "The employee who was in charge of the store at the time of the incident will be terminated. Out of respect for the victim, the store will be closed. We will contact Mr. João Alberto's family to provide the necessary support".

The killing outraged Brazil on the eve of 20 November, National Black Consciousness Day, a day to celebrate a regained awareness by the black community of their great worth, value, importance and contribution to Brazil.

On Friday, the Brazilian vice president, Hamilton Mourão, said that the killing was not motivated by racism, asserting that racism in the country does not exist.

"For me, in Brazil there is no racism. This is something they want to import here to Brazil, it doesn't exist here", the vice president stated, adding that the incident was "regrettable".

The VP's statement, however, met additional intense backlash on social media, as a federal deputy, Talíria Petrone, observed that Mourão "denies the reality about black population" and "does not know the history of his country".

“Racism not only exists, it kills. A government that denies the structural ills of our society pushes it into the abyss", federal deputy Alessandro Molon added.

Brazilian protests sparked by the killing follow a nationwide series of protests against racism and police brutality in the United States following the murder of a black resident of Minneapolis, George Floyd, by white police in late May.

The death of George Floyd sparked a wave of protests, some violent, around the country, which only intensified after similar incidents involving other black people being killed or injured in altercations with police has continued.