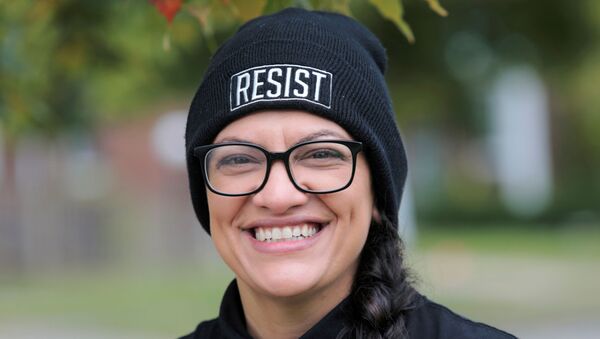 © REUTERS / REBECCA COOK
Subscribe
Kirill Kurevlev
Writer
All materialsWrite to the author
Rashida Tlaib is a member of an informal left-wing Democratic group in the US Congress also including Alexandria Ocasio-Cortez, Ilhan Omar and Ayanna Pressley, representing, among other things, ethnic and social minorities. The so-called Squad was formed in 2018 to advocate progressive views described by some as leaning toward radicalism.

Twitter users discussed a member of the Democratic Congressional group 'The Squad', as Michigan representative Rashida Tlaib, who has been accused of anti-Semitism, is set to speak on a panel discussing ways to fight it, Fox News reported.

The event, titled "Dismantling Anti-Semitism, Winning Justice", is expected to include two members in its panel previously accused of expressing anti-Semitic views. Lamont Hill, a professor, was reportedly fired from CNN after commenting on the Palestinian apartheid, and writer Peter Beinart who, in an op-ed for the New York Times, called for abandoning the two-state solution between Israel and the Palestinians.

Tlaib was criticized by Republicans after saying in 2019 that she experienced a "calm feeling" when thinking about the Holocaust, stating that the Palestinians provided land for the Jews to build a “safe haven”. The congresswoman observed that her critics were "twisting" her words, and defended her comments.

Policing my words, twisting & turning them to ignite vile attacks on me will not work. All of you who are trying to silence me will fail miserably. I will never allow you to take my words out of context to push your racist and hateful agenda. The truth will always win.

The House minority whip, Republican Steve Scalise, condemned Tlaib's comments, calling on US Speaker of the House, Democrat Nancy Pelosi, to "take swift action and make it clear that these vile comments have no place in Congress".

The panel composition was mocked by some on Twitter, with conservative Daily Wire columnist Harry Khachatrian suggesting that it should have included "neo-Nazi" and "white supremacist" Richard B. Spencer, and the Nation of Islam leader and "black supremacist" Louis Farrakhan, both of whom have reportedly often expressed anti-Semitic views.

isn't this like an arsonist speaking about fire prevention?
👀

An arsonist masquerading as a firefighter, and when caught blaming the victims.

i heard harvey weinstein is going to present on office etiquette

That's like asking a burglar to speak on a panel about home security systems.

Last year, the Israeli government refused a request by Tlaib an another prominent member of The Squad, Ilhan Omar, after they made a request for a humanitarian visit to the Jewish state, claiming that their visit was intended to promote boycotts against Israel. Tlaib, reportedly promised not to promote boycotts and Israel granted her permission to enter the country, but she then changed her mind, suggesting that she would not allow herself to be put under "oppressive conditions."

The same year she was condemned by some members of the Jewish community who called on her to explain alleged ties to "Palestinian radicals" after she hosted a private dinner following her election to Congress which was reported to have been attended by anti-Israel activists.