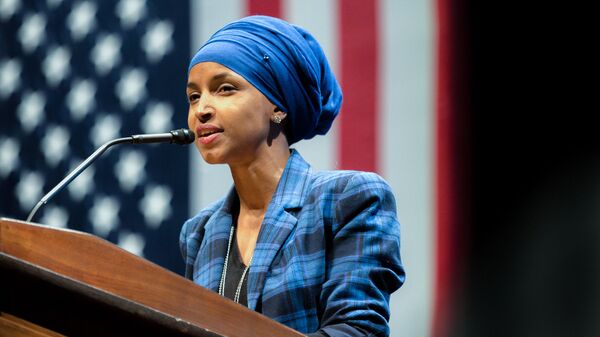 Ilya Tsukanov
All materialsWrite to the author
In September and October, the Trump administration hammered out a series of normalisation-of-relations agreements between Israel and the United Arab Emirates, Bahrain and Sudan, compelling the latter three countries to recognise the Jewish State in exchange for lucrative weapons deals and the lifting of sanctions.

Democratic Congresswoman Ilhan Omar has sent the Biden ‘transition team’ some foreign policy advice, encouraging it to scrap the recent peace/recognition deals between Israel, the UAE, Bahrain and Sudan. In a long-telegram style series of tweets on Donald Trump’s Mideast policy, the lawmaker accused the President of disguising arms agreements as ‘peace deals’.

“He recently inked so-called ‘peace deals’ between the United Arab Emirates, Bahrain, Sudan, and Israel. The only problem? They weren’t peace deals. They’re arms sales to human rights abusers, designed to empower the Gulf States and increase the risk of war with Iran,” Omar wrote.

Trump proposed a staggering $23 billion in arms sales to the UAE, which the administration admitted was linked to the deal. (I introduced resolutions this week to ban these sales.) https://t.co/NW1dsGaqzE

“Trump proposed a staggering $23 billion in arms sales to the UAE, which the administration admitted was linked to the deal,” she added, pointing out that she had introduced resolutions in the House to try to stop these arms sales.

Suggesting that the diplomatic agreements have only “normalised the occupation” of Palestinian territories by Israel, Omar lamented that they’ve “made real peace for Israelis and Palestinians increasingly unlikely.”

Rather than make statehood or self-determination more likely, they have normalized the occupation and made real peace for Israelis and Palestinians increasingly unlikely.

According to the congresswoman, Joe Biden now “has a tremendous opportunity to reverse” Trump’s foreign policy, and to position the US “at an equal distance” from all the Middle Eastern “dictators,” whether it be Iran, or Saudi Arabia, or the Yemeni Saudi puppet government, or the UAE.

We can hold Iran accountable for its human rights violations while also holding Saudi Arabia, Yemen, and the UAE accountable.

Meanwhile, he cozied up to Saudi Arabia, a regime responsible for some of the worst human rights atrocities of our young century—including routing murder of human rights advocates and war crimes in Yemen.

Omar, 38, is a member of the informal group of ‘progressives’ within the Democratic Party known as ‘The Squad’, whose other members include Representatives Alexandria Ocasio-Cortez, Ayanna Pressley and Rashida Tlaib. The lawmakers’ policy proposals include Medicare for all, a ‘Green New Deal’ for America and major changes to US foreign policy. The Squad has been a favourite target of Republican-leaning media and politicians, who have alleged that it carries undue levels of influence within the Democratic Party and the Biden campaign.  House Speaker Nancy Pelosi and Biden have repeatedly sought to distance themselves from the ‘progressive’ wing of the party, however, promising that “nothing will fundamentally change” under a Biden presidency, and that Medicare-for-all, the Green New Deal and major changes to foreign policy were off the table.

In September, the UAE, Bahrain and Israel signed the Abraham Accords, with Abu Dhabi and Manama becoming the first two Persian Gulf Arab states to normalise ties with Tel Aviv, and the third and fourth Arab countries after Egypt and Jordan to do so. In late October, the Sudanese government signed a similar agreement with Israel. Washington sweetened the deals by providing the Persian Gulf states with lucrative arms deals and promising to lift economic sanctions and the ‘state sponsor of terrorism’ designation against Sudan.

Biden's Foreign Policy Aide Opposes Idea of Selling F-35s to UAE, Says Only Israel Should Have Them
Trump’s efforts earned him a nomination for the 2021 Nobel Peace Prize.

Palestinian leaders have accused the Persian Gulf states and Sudan of ‘selling out’ to the US and Israel, and of ‘stabbing Palestinian people in the back’. Prime Minister Benjamin Netanyahu of Israel dismissed this criticism, suggesting the Gulf sheikdoms’ decision was a sign that they would no longer be “held hostage by the Palestinians.”

17 of the Arab League’s 22 members continue to have no relations with Israel.