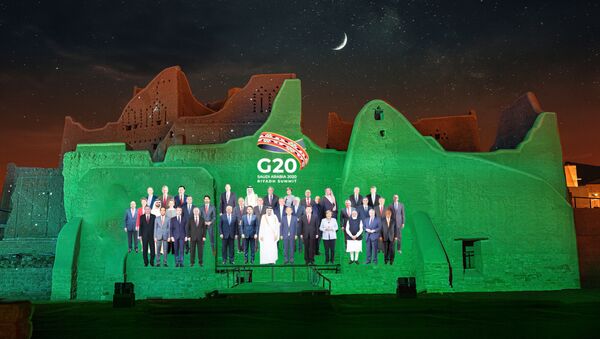 © THE SAUDI G20 PRESIDENCY MEDIA
Subscribe
MOSCOW (Sputnik) - Russian President Vladimir Putin said at the G20 summit on Saturday that the world is facing a major economic crisis this year that can be comparable to the Great Depression.

"The scale of the challenges that humanity faces in 2020 is truly unprecedented. The coronavirus epidemic, global lockdown and freezing of economic activity have triggered a systemic economic crisis that the modern world has probably not known since the Great Depression," Putin said.

The Russian president also praised the contribution of the United States to the world economic recovery.

Putin added that mass unemployment and poverty remain major issues for the world.

"The main risk, of course, remains … despite some positive signals, the main risk will still remain massive long-term, so-called stagnant mass unemployment. With the subsequent growth of poverty and social disorder," Putin said.

Devaluation of national currencies during the global COVID-19 pandemic is a major risk, especially for low-income countries, the Russian President added.

"Their fiscal revenues have decreased significantly, and the need to allocate significant funds to fight the pandemic is growing almost every day. A major risk is posed by the devaluation of national currencies and, accordingly, an increase in the cost of servicing public debt - primarily for low-income countries, where two-thirds of loans are in dollars," Putin said.

The Russian President also has urged G20 members to abandon protectionism and sanctions.

"We must aim to contain protectionism, the practice of imposing sanctions unilaterally and to mend supply chains," he said.

On Measures to Prevent Further Rise of Inequality Amid Pandemic

Putin called on the participants in the G20 summit in Riyadh to take additional steps to prevent the deterioration of the debt crisis in developing countries, as well as an increase in economic and social inequality amid the coronavirus pandemic.

During his address, Putin noted the considerable assistance provided by the International Monetary Fund and the World Bank to developing countries in these conditions. The president recalled that in April, at their suggestion, the G20 decided to establish a temporary moratorium on debt payments.

"This is, of course, a highly demanded initiative. However, it applies only to the poorest countries and does not include their debts to private lenders, affecting less than 4 percent of the total cost of servicing the debt of developing countries this year. I think additional measures are needed to prevent the worsening of the situation and growth of economic and social inequality," he said.

"Russia supports the key project considered by the current summit, which aims to make efficient and safe vaccines accessible for everyone. There is no doubt that immunizing drugs should be common public property. And our country, Russia, of course, is ready to provide the vaccines developed by our scientists to those in need," Putin said.

The president added that competition among pharmaceutical companies is inevitable, but there will be enough work for everyone, as the scale of the pandemic obliges countries to use their potential to provide COVID-19 vaccines to the global population.

There is no alternative to the World Trade Organization (WTO) today, but changes are needed in light of contemporary global challenges, Putin said.

"In general, the G20 should continue to search for common approaches to reforming the World Trade Organisation in accordance with contemporary challenges," Putin said.

The Russian president added that this goal will not be achieved without a stable, efficient and multilateral trading system based on universal norms and principles.

"And there is no alternative to the World Trade Organisation today," Putin added.