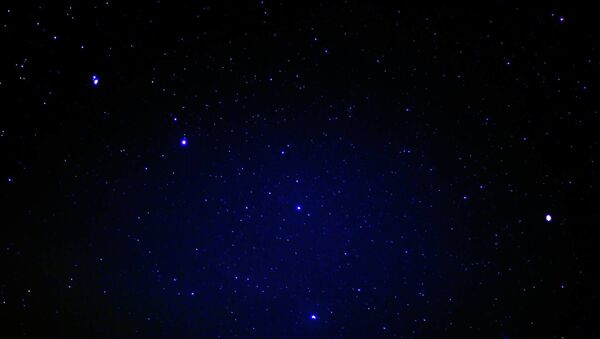 CC BY 4.0 / / Starry night sky
Subscribe
Andrei Dergalin
All materialsWrite to the author
Since the descriptions of some of the constellations found in the temple apparently weren't accompanied by any images, it made working out which stars were being talked about in the texts problematic.

Efforts to restore a millennia-old Egyptian temple located near Luxor yielded some surprising discoveries related to the astronomical observations of the ancients, the Daily Express reports.

According to the newspaper, as archaeologists managed to discover "original paintings and hieroglyphics" on the temple's walls, they also found descriptions of constellations, both known – such as the Big Dipper and the Orion, which ancient Egyptians called Mesekhtiu and Sah respectively – and previously unknown.

"They were previously undetected under the soot and are now being exposed piece by piece," Egyptologist Professor Christian Leitz from Germany's University of Tubingen said. "Here we have found, for example, the names of ancient Egyptian constellations, which were previously completely unknown."

One of the constellations in question, for example, was called "Apedu n Ra" ("the geese of Ra" - Ra being the ancient Egyptian god of sun), but since its description apparently wasn't accompanied by any drawings, it makes working out which constellation is being described extremely difficult.

The temple was first excavated in the 20th century by the late French Egyptologist Serge Sauneron who, as the newspaper notes, "recognised the significance of the inscriptions, but was unable to interpret them as they were beneath thick layers of soot and bird excrement."

Professor Leitz adds: "The hieroglyphics that Sauneron explored were often only very roughly chiselled out, the details only applied by painting them in colour. This means that only preliminary versions of the inscriptions had been researched. Only now do we get a picture of the final version."