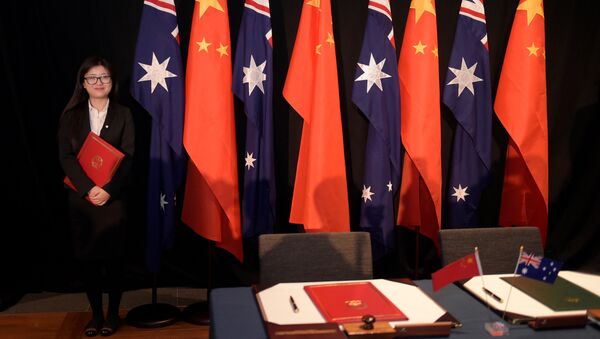 Jason Dunn
All materialsWrite to the author
Relations between China and Australia have soured in recent years, beginning with the blocking of Chinese telecom giant Huawei in 2018. This year, tensions rose further after China slapped tariffs on Australian imports after Canberra called for an investigation into the coronavirus outbreak.

The Australian government has been warned that ministers in Beijing will not be answering phone calls from their Canberra counterparts unless Scott Morrison's government drops its "cold war mentality" and stops seeing China as a strategic threat.

Speaking to the Guardian Australia on Friday, a Chinese embassy official urged Canberra to decide if it considers Beijing to be a “threat” or an “opportunity”, establishing a major precondition for restarting ministerial-level negotiations, which were halted earlier this year.

The embassy chief placed responsibility on the Australian government for repairing diplomatic ties, asking them to reflect on its options “to arrest the decline of the bilateral relationship” and establish a more amicable atmosphere for talks.

“Of course you can say it takes two people to tango but here, you see, the problem is all caused by the Australian side”, said the official, who asked not to be named.

“We think that the cold war mentality should be discarded so that China can be seen as an opportunity and not a threat. Otherwise the whole trajectory will be derailed".

“The problem is caused by the Australian side,” the Chinese embassy official said on Friday.

“China is trying to send a message that Australia should change the mentality of how you look at China and its development and whether it’s an opportunity or a threat – that is the issue."

Australia’s provocative, confrontational moves, as well as its erroneous words & deeds on issues concerning China’s core interests & major concerns, are the crux of the current difficulties in China-Australia relations. Australia must correct its mistakes by taking real actions. pic.twitter.com/A6ShJaRcyS

​Conversely, Australia's prime minister Scott Morrison and government ministers have repeatedly claimed that it is Beijing's responsibility to respond to the “mature, sensible dialogue”.

While speaking to a Business Council of Australia event, Morrison said that although his government is willing to maintain cordial relations, it is “not prepared to agree to a meeting on the condition that Australia compromise and trade away" values or sovereignty.

Trade minister Simon Birmingham has lamented the lack of contact for months, reporting that he has been unable to reach his Chinese counterpart to discuss economic measures that have hit cost Australian exports billions of dollars.

Birmingham's comments were supported by the treasurer, Josh Frydenberg, who said earlier this week that dialogue would be the most effective way to solve ongoing differences between the two nations.

In recent weeks, Chinese officials – in both Beijing and Canberra – have increasingly expressed their opposition to the Australian government's geopolitical stance, outlining the objections officially.

Nine News revealed this week that the Chinese embassy had provided the channel with 14 key "grievances", including Australia’s public condemnation of alleged human rights abuses and issues of territory in Hong Kong, Taiwan, and Xinjiang

China's ruling Communist Party has focused on issues of sovereignty and recognised territorial boundaries as a “core interest”.

The list also included Canberra's call for a COVID-19 inquiry, an array of decisions around Chinese foreign investment propositions, and the 2018 decision by the Turnbull government to choke “high-risk” Chinese telecoms, including Huawei, from Australia's 5G network. 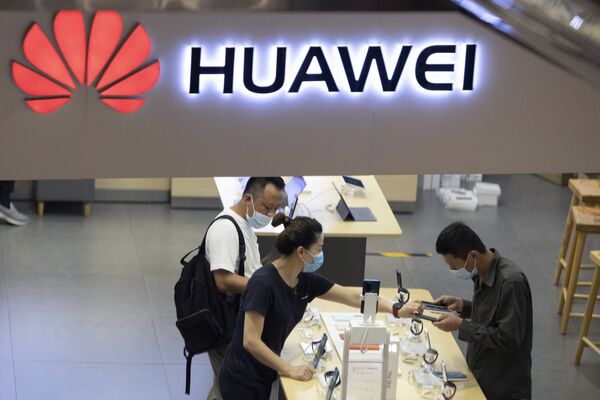 In this July 15, 2020, file photo, visitors wearing masks to curb the spread of the coronavirus look at the latest products at a Huawei store in Beijing. China accused Washington of damaging global trade with sanctions that threaten to cripple tech giant Huawei and said Tuesday it will protect Chinese companies but gave no indication of possible retaliation
© AP Photo / Ng Han Guan

According to Nine News, the embassy’s list also includes “antagonistic” media reporting and “outrageous” comments from politicians. This led to a backlash from Australian ministers, who called the demand unhelpful and an attempt to restrict the freedom of Australia's media.

“China is angry. If you make China the enemy, China will be the enemy", the report included, citing an official.

According to The Guardian, the quote refers to a comment made by the former Australian ambassador to China, Geoff Raby.

“Of course, if China is treated as an enemy, it most certainly will become one”, Raby wrote in the Australian Financial Review in July.

Though Morrison admitted this week that administering the worsening relations with China had become “a very difficult issue”, Australia has made steps to strengthen ties with regional allies.

This comes as the prime minister visited Tokyo this week to establish a broad agreement for a new defence pact. During the meeting, Morrison said that Australia and Japan did not consider China as a strategic competitor, contradicting the overarching position of the United States.

in order to raise our two countries’ security and defence co-operation into a new dimension. I will continue to work in close cooperation towards the realisation of a free and open Indo-Pacific together with Prime Minister Morrison, a friend with the same resolve. 🇯🇵🇦🇺 (2/2) pic.twitter.com/51sh43ntgf

​However, the joint statement issued by Morrison and his Japanese counterpart, prime minister Yoshihide Suga, received a backlash from Beijing after raising “serious concerns” about China’s activity in the South China Sea and “grave concerns” regarding Hong Kong.

While ministerial talks are suspended, China and Australia maintain consistent contact at the official level. These include Chinese diplomats in Canberra in routine talks with the Department of Foreign Affairs and Trade, and Australian diplomats in Beijing speaking with the Chinese ministry of foreign affairs.