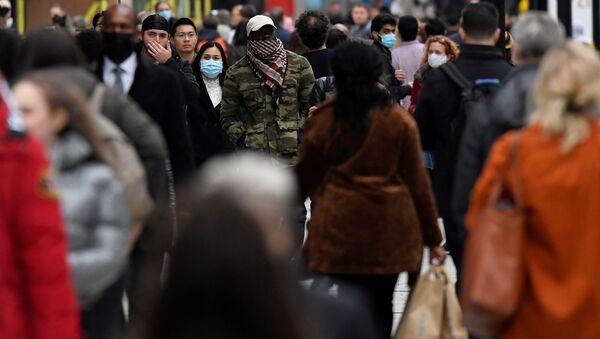 Demond Cureton
All materialsWrite to the author
Industry leaders and consortiums were joining efforts to build sustainable supply lines via key technologies aimed at tracking and monitoring raw materials in the manufacturing process, it was found at a Reuters Ethical Corporation event this week.

Louise Nicholls, founder of Suseco and vice-chair of the Institute of Environmental Management & Assessment (IEMA), chaired the panel talks.

Sputnik takes a closer look at the measures being implemented in some of the world's biggest industries.

Blockchain In The Supply Chain?

Mr Galichon explained how products in the luxury goods market were manufactured in precise locations of the world, with raw materials originating from specific locations globally.

But the ongoing COVID-19 pandemic had disrupted customer flows to Europe and prioritised online shopping, forcing suppliers to procure sustainable alternatives to distribution processes in a bid to lower rising corporate carbon footprints.

Numerous firms adopting sustainable supply chain practices have deployed blockchain technologies to track transfers of raw materials and assess whether the communities they were produced in faced increased risks.

Nearly 20 UK MPs, 40 Firms Urge End to Brazil's Amazon 'Forest Law' or Face Boycott in Open Letter
Speaking on tracking efforts, Galichon said customers were asking "more and more" where the different raw materials had originated, adding: "From there, we use blockchain to [show] the full transfer of raw materials."

"What do we have to change to modify our supply chains to adapt to this new world that we have, where people can't travel as much as they could before," he said, adding data collection was vital to track supply chains and make crucial changes.

Blockchain And 'At-Risk' Suppliers in the Global Community

Firms were tasked with stabilising demand and income for vulnerable communities at risk of major supply chain disruptions, including the ongoing COVID-19 pandemic, Mr Davis said at the event.

A "Timely Creation": AIIB 2020 Speakers Stress Value of Pandemic Efforts, Green, Digital Economies
Suppliers considered at-risk were often based in regions such as the Amazon Basin, Samoa, Ghana, India and other forested regions, among others, with communities being in vulnerable situations, he said.

"Ultimately, having stable demand and stable income means that they can put money aside for the inevitable, extraordinary floods that come along, so they can protect themselves. We can help them add more value to their products so they can benefit more from that [and] protect themselves and the forests around them," he explained.

Blockchain was commonly used to map commodities in the stock market via trade flows and satellite data, and could later be transferred to a map indicating their point of origin, path in supply lines, shipment routes and production process, he said, adding deploying blockchain technologies posed data issues, including large data gaps in reported commodities.

Data from supply chain tracking could be used in a four-stage assessment, SupplyShift's Barismatov told the audience.

A "Timely Creation": AIIB 2020 Speakers Stress Value of Pandemic Efforts, Green, Digital Economies
Businesses should determine what to do with specific commodities, raw materials and other resources while running due diligence checks according to a 'code of conduct' along with possible audits, he explained.

"If you're buying palm oil, you're going to flag the supplier because they haven't done the things that are required for my sustainable palm oil suppliers, and that could be for any material, any issue, and that feedback loop is really the only way that a company is going to make change, when the person that's going to buy the thing has the right information," he said.

As Tourism, Fashion Sectors Continue to Rise, Sustainable Business Models Urgently Needed - Founders
According to him, firms were hit by major data gaps, with the largest being "the consumer themselves in how they actually use the clothes they have bought", including washing, wearing and disposal habits, Murray explained.

Many firms had set targets of 13 percent recyclable materials, but only roughly 1 percent was actually recycled, he said.

"We're building up that data set in real-time to get the new sorts of insights about those usage patterns [meaning] we can tell if they wash their socks as often as they say they do, but coming out of it is a really important data set that we will be publishing widely to help with those designs for future inventions by other in the supply chains to make that linear supply chain, as it is now, a genuinely circular one, he concluded,"

The Consortium cites over 4,200 peer-reviewed studies and works with over 230 organisations. It has also partnered with major companies such as Wal-Mart, Adidas, North Carolina State University and HSBC Bank, among others.

000000
Newsfeed
0
New firstOld first
loader
LIVE
Заголовок открываемого материала
Access to the chat has been blocked for violating the rules . You will be able to participate again through:∞. If you do not agree with the blocking, please use the feedback form
The discussion is closed. You can participate in the discussion within 24 hours after the publication of the article.
To participate in the discussion
log in or register
loader
Chats
Заголовок открываемого материала
Worldwide
InternationalEnglishEnglishMundoEspañolSpanish
Europe
DeutschlandDeutschGermanFranceFrançaisFrenchΕλλάδαΕλληνικάGreekItaliaItalianoItalianČeská republikaČeštinaCzechPolskaPolskiPolishСрбиjаСрпскиSerbianLatvijaLatviešuLatvianLietuvaLietuviųLithuanianMoldovaMoldoveneascăMoldavianБеларусьБеларускiBelarusian
Transcaucasia
ԱրմենիաՀայերենArmenianАҧсныАҧсышәалаAbkhazХуссар ИрыстонИронауОssetianსაქართველოქართულიGeorgianAzərbaycanАzərbaycancaAzerbaijani
Middle East
Sputnik عربيArabicArabicTürkiyeTürkçeTurkishSputnik ایرانPersianPersianSputnik افغانستانDariDari
Central Asia
ҚазақстанҚазақ тіліKazakhКыргызстанКыргызчаKyrgyzOʻzbekistonЎзбекчаUzbekТоҷикистонТоҷикӣTajik
East & Southeast Asia
Việt NamTiếng ViệtVietnamese日本日本語Japanese俄罗斯卫星通讯社中文（简体）Chinese (simplified)俄罗斯卫星通讯社中文（繁体）Chinese (traditional)
South America
BrasilPortuguêsPortuguese
NewsfeedBreaking
04:43 GMTUS Marine Colonel Put in Brig For ‘Asking for Accountability’ Over US Departure From Afghanistan
04:03 GMTWitness Who Claims She Saw Prince Andrew Dancing With Giuffre at Club to Testify in Court - Report
03:24 GMTBennett Claims He Said 'No Three Times’ to President Biden During Their August Meeting
03:16 GMTRepublicans Slam DHS Chief Mayorkas for Allowing Thousands of Haitians Into US
01:37 GMTUS ‘Humiliated Like Never Before’, Trump Says, After DHS Allowed Thousands of Migrants to Pour in
01:31 GMTLockheed Martin to Build US Army’s Next Generation Tactical Vehicle Based System
01:10 GMTBorder Patrol Agents Disgruntled Over Biden's Attempts to Throw Them 'Under the Bus' - Report
00:53 GMTBeard-Check: Afghan Barbers Banned From Shaving, Trimming Beards - Reports
00:27 GMTR. Kelly Found Guilty: Will Artist Be Removed From Music Services?
00:03 GMTIs Sir Alex Ferguson Right, That Ronaldo, and not Messi, Could Score a Hat-trick for Anyone?
00:00 GMTUS Senator Menendez Urges New Sanctions on Turkey if It Acquires More Russian Weapons
YesterdayInsurgents Who Detained President of Guinea Declare Transitional Charter - Reports
YesterdayTexas Lawmakers Propose New Congressional Districts in Cities of Austin, Houston
YesterdayIOM Looking for Alternatives for Haitians at US Border, Brazil Being 1 Option - Sources
YesterdayCzech Republic Will Purchase Israeli-Made Air Defenses to Replace Soviet Gear
YesterdaySPD Leader Scholz Says Yet to Hear Congratulations From CDU/CSU Rival
YesterdayTaliban Say Norwegian NGO Promises to Ship Humanitarian Aid to Afghanistan This Winter
YesterdayUS Blue-Chip, Tech Stocks Fumble on Worries of Rate Hike
YesterdaySerbian Troops Monitoring Situation at de-Facto Serbia-Kosovo Border Amid Protests
YesterdayUnidentified Man Threatens Journalist, France's Potential Would-Be President Eric Zemmour - Reports