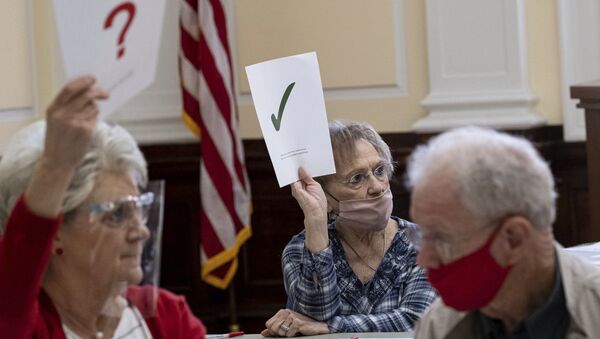 © AP Photo / Ben Gray
Subscribe
Svetlana Ekimenko
All materialsWrite to the author
As Georgia began its audit of nearly 5 million ballots cast in its very close presidential election on 3 November, an earlier report claimed that a cache of over 2,600 uncounted ballots had turned up in its Floyd County, which are expected to reduce President Donald Trump's state-wide deficit to Democratic presidential candidate Joe Biden.

Over 3,000 untallied ballots have turned up in Georgia amid the state’s audit of the 2020 presidential election, reported Fox News.

As the manual re-count continues, officials in Fayette County discovered 2,755 ballots that had not been included in the original count, writes the outlet.

"There was an issue where we noticed there were more people on the absentee ballot filed for voting in person in Fayette County than was in the actual reporting. It was discovered today for certain. Because of the audit, we found this," Georgia election official Gabriel Sterling was quoted as saying.

According to Sterling, the issue arose due to several individuals failing to follow proper procedures. Besides this, in another incident, some 284 uncounted ballots were found in Walton County.

The local Board of Elections chair, Lori Wood, was cited as suggesting the error had occurred after votes had previously been uploaded from only one of the two ballot scanners in a precinct.

The recent findings follow the discovery of more than 2,600 ballots in Floyd County that had not been counted. At the time, Floyd County Republican Party chair Luke Martin was cited as branding the incident a “concerning” mishap, while nevertheless insisting that it “doesn’t appear to be a widespread issue.”

The discovery of more uncounted ballots in Fayette County led Martin to suggest that insufficient observation of the counting process in parts of the state was a possible explanation for the mistakes currently being exposed.

"If this was human error and the Board of Elections allowed the parties, allowed the public to view the counting of the ballots, we could have seen that. But we didn't get the opportunity to be there," Martin said on 17 November, appearing on Fox News' "The Story".

According to the secretary of state's office, Georgians in 159 counties cast nearly 5 million ballots in the presidential election. 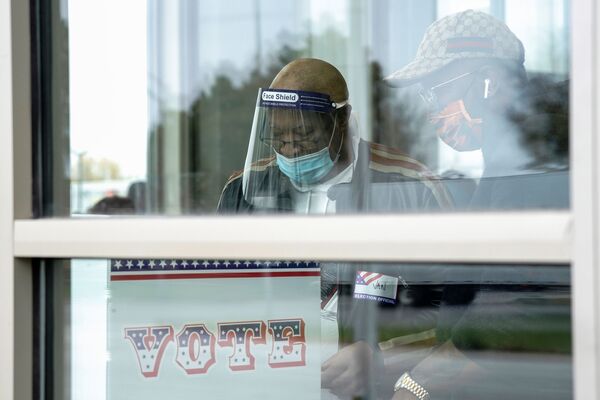 However, despite the currently unearthed mistakes with the ballot tallying, experts are cited as doubting the audit might potentially alter the state's preliminary election result.

Democratic presidential candidate Joe Biden had been leading by approximately 14,000 votes in Georgia, with the state’s election official Gabriel Sterling saying the updated count in Fayette County resulted in the lead dropping to slightly under 13,000.

After an audit request issued by incumbent President Donald Trump and the Republican Party, Georgia began recounting its nearly 5 million ballots by hand on 13 November.

Trump has filed several legal challenges in the wake of the 3 November elections, citing alleged voter fraud, despite major US media outlets announcing that Democratic presidential candidate Joe Biden was the winner of the 2020 presidential election.

Trump has claimed two Republican members of the Wayne County, Michigan, four-member canvassing board were “harassed” into certifying election results for the city of Detroit.

After initially citing problems with the electoral rolls, the two reportedly reversed their decision following Democrat-levelled accusations of partisanship and racism.

The results had tipped the key swing state of Michigan from Trump to Democratic candidate Joe Biden in the wake of the 3 November Election Day.

Slamming the incident, Trump insisted that Michigan could no longer certify the election result, as he echoed previous allegations that more votes were counted in Wayne County than there were eligible voters.

In Detroit, there are FAR MORE VOTES THAN PEOPLE. Nothing can be done to cure that giant scam. I win Michigan!

​If Michigan were unable to issue an official vote count, the Republican-dominated state legislature would decide which candidate will receive the state's six electoral college votes.

Joe Biden's electoral college vote tally would only be four more than the 270 required to be confirmed president without the electoral college votes of Michigan and Georgia. Currently, the Trump campaign has launched legal challenges to the narrow-margin election results in Pennsylvania, Wisconsin, Arizona and Nevada.