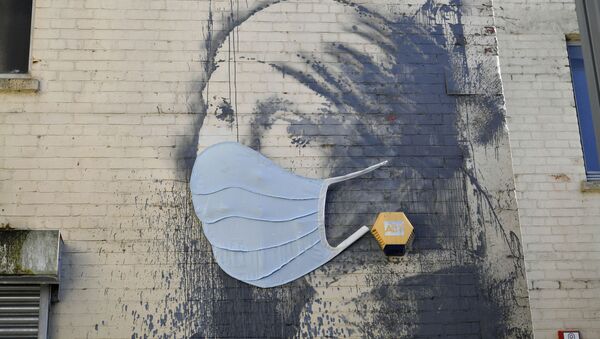 © AP Photo / Ben Birchall
Subscribe
Igor Kuznetsov
All materials
While the study by Denmark's leading hospital failed to see any significant protection against coronavirus transmission, the doctors admitted that the results are inconclusive due to a number of factors.

A comprehensive Danish study has found that face masks provide no clear protection from Covid-19 infection to the wearer.

The study of more than 6,000 Danes published by the Copenhagen-based hospital Rigshospitalet saw no significant protection against coronavirus transmission.

Researchers expected to see a halving of the risk of transmission in cases where subjects were wearing masks, but were surprised to see a far more modest rate of protection of up to 20 percent.

The study compared how well a “protected” group of face mask wearers fared against a second group who did not use them. In the non-mask group, 2.1 percent of participants ended up infected with the novel coronavirus, compared with 1.8 percent of participants in the mask-wearing group. The margin was deemed not substantial enough to conclude the protective benefits of using face masks with certainty.

“The study thereby fails to confirm the expected halving of risk of infection for the wearer of the face mask, but the results could suggest a moderate level of protection of 15-20 percent”, the press release said.

At the same time, the researchers stressed that there are limits to the conclusions that can be drawn from the results.

First, is important to note that the study looked exclusively at the protective effects of masks for the wearer, and not at the wearer’s ability to protect others. Second, the trial was conducted in April and May this year, when face mask use was not widespread in Denmark. Merely 5 percent of the Danish population were estimated to regularly wear masks at that time. Also, during that period, Denmark’s lockdown was still ongoing, and many businesses and public institutions remained closed. Third, the study did not examine the effects of face masks in situations where it is not possible to maintain social distancing.

As such, the study cannot be used to draw conclusions on the general merits of using face masks as an effective preventative measure against Covid-19 infection, the researchers admitted.

Denmark did not enforce face mask rules until mid-August, when they were made mandatory on public transport. In late October, the sphere of mask use was broadened as a new batch of measures against Covid-19 was introduced.

000000
Popular comments
mmm....so there’s no firm conclusion?.....what was the point ? If it was going to show anything it should have studied the transmission rate to others......allegedly that’s the point of wearing em.