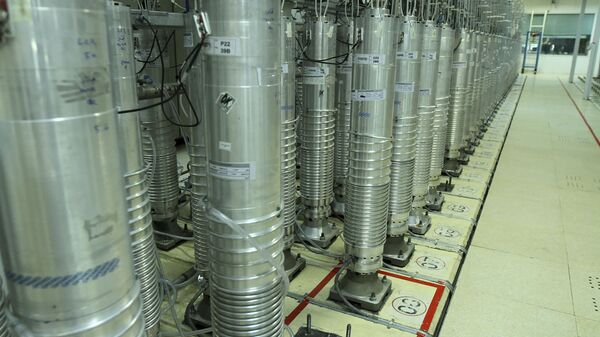 MOSCOW (Sputnik) - The increase in the uranium enrichment level in advanced centrifuges at Iran's underground nuclear facility in Natanz is not significantly different from what the International Atomic Energy Agency (IAEA) knew last about it, IAEA Director General Rafael Grossi said on Wednesday.

"It is already beyond the limitations of the Joint Comprehensive Plan of Action [JCPOA], but in general terms there is no significant increase in volumes, since, as I've already mentioned, they had already been operating in a new place", Grossi told a press briefing after the IAEA's Board of Governors meeting.

According to the official, the agency already knew that Iran had transferred the cascade of 174 IR-2m centrifuges to the Fuel Enrichment Plant in Natanz from a pilot enrichment plant and was going to fire up the centrifuges at the new place, which it did today.

Earlier in the day, Iran's envoy to Vienna-based international organisations, Kazem Gharibabadi, confirmed that the country had begun feeding uranium hexafluoride (UF6) gas into advanced IR-2m centrifuges, prohibited under the 2015 nuclear deal, at the Natanz facility.

Iran is prohibited from running such advanced centrifuges under the nuclear deal it signed in 2015 with China, France, Germany, Russia, the United Kingdom, the United States and the European Union, which stipulates the removal of international sanctions on Tehran in exchange for it scaling down its nuclear program.

The original deal became short-lived, as the US unilaterally withdrew in 2018 and reimposed sanctions on Iran prompting Tehran  to gradually abandon its own commitments.