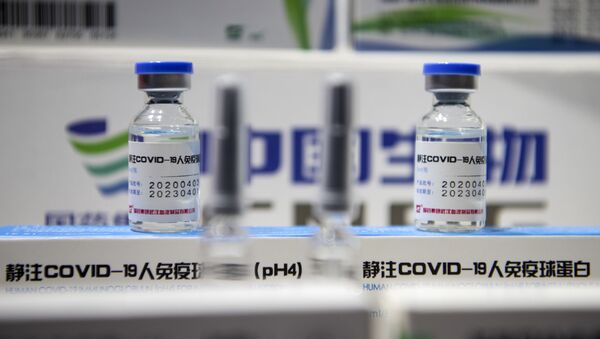 Demond Cureton
All materialsWrite to the author
Early-phase trials for China's latest vaccine have proven "safe" and produced antibody responses in volunteers aged 18 to 59 years, a major study revealed on Tuesday.

Despite producing antibodies lower than levels in previous COVID-19 patients, researchers believe the CoronaVac vaccine may produce sufficient immunity against the disease compared with other vaccines, the study read.

Further phase 3 studies will be "crucial" to determine the full efficacy of the vaccine against SARS-CoV-2, the study said, adding that additional tests with other age groups and patients with pre-existing conditions would also need to be trialled.

“Our findings show that CoronaVac is capable of inducing a quick antibody response within four weeks of immunisation by giving two doses of the vaccine at a 14 day interval. We believe that this makes the vaccine suitable for emergency use during the pandemic," Professor Feng-Cai Zhu of the Jiangsu Provincial Centre for Disease Control and Prevention in Nanjing said.

The news comes as researchers trial CoronaVac along with dozens other candidates, with the first and second clinical trials taking place in Suining county in Jiangsu. 144 healthy volunteers took part in phase one trials from 16 to 25 April this year.

Two groups of 72 volunteers were randomly given low, high and placebo doses of the vaccine, with 96 receiving the former two doses of CoronaVac and 47 the latter, respectively.

All remaining candidates were monitored for antibody counts after 14 and 28 days of immunisation. Participants reported side effects with notes, with more severe symptoms monitored six months after the final dose.

Pfizer Launches Pilot COVID-19 Vaccine Distribution Preparedness Program in 4 US States
Phase 2 trials took place from 3 to 5 May with similar doses but with 300 participants, but production capacity was increased. No difference in side effects was reported, but immune responses were stronger in Phase 2 trials, it read.

Investigations found that boosted manufacturing processes led to a higher number of spike proteins on inactivated viruses in the vaccine, which are used to recognise COVID-19 and trigger an immune response.

According to the study, stronger antibody responses were produced with doses given on day 0 and 28 of the trial. Phase 2 trials did not assess T-cell responses but will be studied in ongoing phase 3 trials.

“CoronaVac could be an attractive option because it can be stored in a standard refrigerator between 2 and 8 degrees centigrade, which is typical for many existing vaccines including flu," Dr Gang Zeng of Sinovac Biotech in Beijing said.

CoronaVac can also remain stable for up to three years in storage, allowing vaccines to reach regions with limited access to refrigeration, Gang added.

But Dr Naor Bar-Zeev of Johns Hopkins University, who was not involved in the Lancet study, warned that results should be "interpreted with caution until phase 3 results are published".

The ongoing pandemic has seen numerous countries race for an effective vaccine against COVID-19, with Sinovac running phase 3 trials in Brazil, Indonesia and Turkey, Reuters reported.

Further vaccines from US phramaceutical giant Pfizer/ BioNTech and Moderna are under development, and Russia's Sputnik V vaccine has been considered for a United Nations list of emergency vaccines after meeting essential criteria.

According to Moscow, Russia's COVID-19 vaccine has shown 92 percent efficacy based on a 21-day evaluation.

000000
Popular comments
According to the peer-reviewed study published by Lancet, Sinovac covid19 vaccine is 100% effective if two doses are taken in 28 days interval and 97% effective if taken in 14 days interval.
Tolerance
18 November 2020, 17:22 GMT2
000000
Western countries spending billion of $ for a 1st hand of western pharmaceutical company vaccine hopefully they will work w/o side effect and they should have also try to sample the Russian or Chinese Vaccine to know which is better .
r8106990
18 November 2020, 20:15 GMT1
000000
Newsfeed
0
New firstOld first
loader
LIVE
Заголовок открываемого материала
Access to the chat has been blocked for violating the rules . You will be able to participate again through:∞. If you do not agree with the blocking, please use the feedback form
The discussion is closed. You can participate in the discussion within 24 hours after the publication of the article.
To participate in the discussion
log in or register
loader
Chats
Заголовок открываемого материала
Worldwide
InternationalEnglishEnglishMundoEspañolSpanish
Europe
DeutschlandDeutschGermanFranceFrançaisFrenchΕλλάδαΕλληνικάGreekItaliaItalianoItalianČeská republikaČeštinaCzechPolskaPolskiPolishСрбиjаСрпскиSerbianLatvijaLatviešuLatvianLietuvaLietuviųLithuanianMoldovaMoldoveneascăMoldavianБеларусьБеларускiBelarusian
Transcaucasia
ԱրմենիաՀայերենArmenianАҧсныАҧсышәалаAbkhazХуссар ИрыстонИронауОssetianსაქართველოქართულიGeorgianAzərbaycanАzərbaycancaAzerbaijani
Middle East
Sputnik عربيArabicArabicTürkiyeTürkçeTurkishSputnik ایرانPersianPersianSputnik افغانستانDariDari
Central Asia
ҚазақстанҚазақ тіліKazakhКыргызстанКыргызчаKyrgyzOʻzbekistonЎзбекчаUzbekТоҷикистонТоҷикӣTajik
East & Southeast Asia
Việt NamTiếng ViệtVietnamese日本日本語Japanese中国中文Chinese
South America
BrasilPortuguêsPortuguese
NewsfeedBreaking
07:45 GMTWhat's Behind Facebook Whistleblower's Call for 'Reining In' the Silicon Valley Giant?
07:21 GMTAs Senior Indian Politicians Flee Congress, Party Aims to Reassess Strategy Ahead of Polls
07:11 GMTNordic Flag Carrier SAS 'Fighting for Survival' Amid Plunging Shares
07:03 GMTBenjamin Netanyahu Still Leading in Polls and Experts Can't See Reason Behind It
07:03 GMTFlorida Gov. DeSantis Says Anthony Fauci Should Be Held Accountable for ‘Unethical’ Experiments
06:39 GMTPolice Book Kashmiri Students Under Anti-Terror Law for Celebrating Pakistan's Win Against India
06:31 GMTThierry Henry: Messi is 'Isolated' in PSG Since It is Still 'Mbappe's Club'
06:18 GMTMoscow Blasts German Defence Minister's Statement About 'Containing Russia' as Inadmissible
05:57 GMTRishi Sunak Reportedly Rules Out Cutting Levy on Household Energy Bills as Fuel Crisis Hits Britain
05:30 GMTNATO Boss Says Door for Finnish Membership Open as Polls Register Spike in Animosity Toward Russia
04:05 GMTCold-Blooded! Donald Trump Jr. Selling Shirts Mocking Baldwin's On-Set Tragedy
04:02 GMTIran’s Resistance to Nuclear Talks 'Wearing Very Thin' for US and Allies
03:13 GMTSpace for Business: Bezos' Blue Origin Unveils Plan to Launch Commercial Space Station
03:13 GMTZinedine Zidane Not Interested in Manchester United Job, Reports
00:55 GMTIsrael’s Strike Plans for Iran Could Take More Than a Year to be Fully Ready, Paper Claims
00:30 GMTJamaican Pastor Accused of Human Sacrifices Dies in Car Crash En Route to Court
00:19 GMTEverything You Need to Know Before the Astros and Braves Face Off in the World Series
YesterdayUS Pauses Delivery of $700 Million in Emergency Economic Aid to Sudan
Yesterday‘News Black Hole’: A Year of War Shows Why UN Needs to Monitor Human Rights in Western Sahara
YesterdayUS, UK Condemn Military Coup in Sudan, Vow to Back Democratic Civilian Government