‘This is Idiotic’: Ted Cruz Bashes Fellow US Lawmaker for ‘Being a Complete A**’ Over Mask Dispute 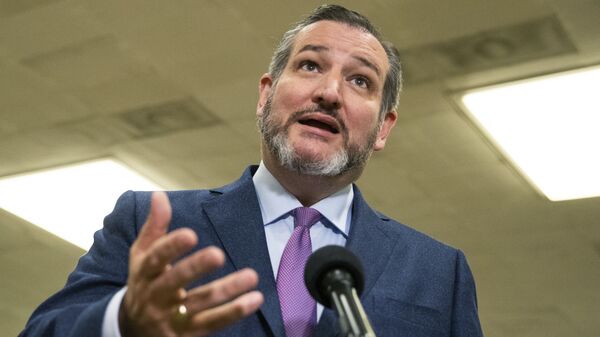 Gaby Arancibia
All materialsWrite to the author
While masks are mandatory in the US Congress’ House of Representatives, the Senate chamber does not require lawmakers to follow such rules - instead, face coverings are only recommended.

US Sen. Ted Cruz (R-TX) took to Twitter late Monday to provide his take on a heated exchange of words between two fellow senators, calling one of his colleagues a “complete a**” for demanding that another lawmaker wear a mask while inside the congressional chamber.

The Monday dispute regarding the use of masks involved Sen. Sherrod Brown (D-OH) and Sen. Dan Sullivan (R-AK). Video footage of the interaction shows a mask-wearing Brown standing at a lectern, immediately requesting that Sullivan, who was presiding over the Senate at the time, wear a mask.

“I'd start by asking the presiding officer to please wear a mask as he speaks,” Brown said, before quickly remarking that he “can’t tell [Sullivan] what to do.” Sullivan, in turn, retorted that he does not wear a mask when “speaking” in the chamber, like "most senators."

“I don’t need your instruction,” the Alaska senator told Brown.

The remainder of the verbal exchange saw Brown remark that “there clearly isn’t much interest in this body in public health,” and that Senate Majority Leader Mitch McConnell (R-KY) “doesn’t seem to care.”

However, hours after the exchange, Cruz weighed in on the matter, calling the incident completely “idiotic.”

“This is idiotic,” Cruz wrote in a late-night tweet. “[Brown] is being a complete a**. He wears a mask to speak - when nobody is remotely near him - as an ostentatious sign of fake virtue.”

The Monday altercation, however, isn’t the first time that Brown has called on a colleague to don a mask. In fact, in a tweet fired off later in the day, the Ohio senator wrote that his concerns were “once again … refused.”

According to the Washington Post, while masks are mandatory on the House floor, the same cannot be said in the Senate, where it’s only recommended that officials wear a mask.

The incident comes as the US Centers of Disease Control and Prevention updated their guidance on masks, which indicate that face coverings are strongly suggested to “prevent the transmission of SARS-CoV-2,” the virus that causes COVID-19.

“Masks are primarily intended to reduce the emission of virus-laden droplets ('source control'), which is especially relevant for asymptomatic or presymptomatic infected wearers who feel well and may be unaware of their infectiousness to others, and who are estimated to account for more than 50% of transmissions,” reads the health agency’s bulletin.

The agency has also urged individuals to “wear a mask in public settings and when they are around people who do not live in their household,” underscoring that masks themselves are not a substitute for social distancing.