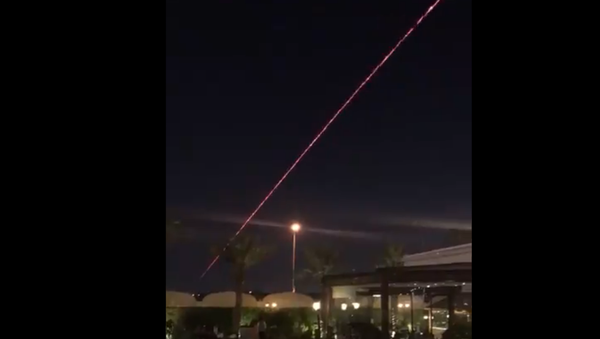 © Photo : Twitter / @thestevennabil
Subscribe
Daria Bedenko
All materialsWrite to the author
The so-called Green Zone in the Iraqi capital city of Baghdad frequently experiences rocket attacks, which typically do not result in casualties or significant damage.

The Iraqi Security Media Cell revealed in a statement that a child was killed and five people were injured after several rockets landed in Baghdad's Green Zone.

The statement also said that seven rockets were fired: four fell in the Green Zone, and three outside the area - one near Medical City, another at the door of the Al-Zawra Park, and a third exploded in mid-air.

The rocket that landed near Al-Zawra Park killed a girl and injured five civilians.

According to the statement, the rockets were launched from Al-Dhatt street in the Al-Amin neighborhood.

Earlier, Reuters said that the Iraqi military had confirmed in a statement that four Katyusha rockets fell in the Baghdad Green Zone. The statement also reportedly added that the rockets were launched from a neighbourhood in the Al-Alf Dar district in New Baghdad.

Initially, multiple reports on social media said that several explosions and US embassy sirens were heard in the Green Zone as rockets landed in the area.

​​According to an earlier report by the AP, Iraqi security officials said that two Katyusha rockets landed inside the Green Zone near the US embassy.

Video shared in social media showed the alleged moment that an anti-missile system intercepted the rocket in the Green Zone.

Reports on rockets hitting Baghdad's Green Zone emerged shortly after US Department of Defence announced that American troops would be reduced to 2,500 in Iraq and Afghanistan by January.