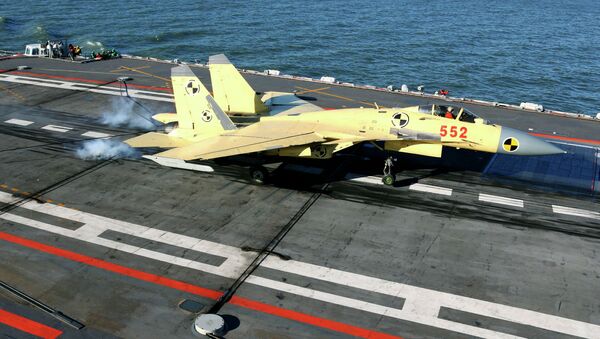 Morgan Artyukhina
All materialsWrite to the author
The electromagnetic launch system (EMALS) on China’s Type 002 aircraft carrier presently under construction could give the heavy J-15 fighter a second life in naval aviation.

The existence of this model of J-15, dubbed the J-15T, is not new information. However, these photos are perhaps the clearest images yet of the new catapult gear.

As far as I know this is the first very clear close-up image of the CATOBAR-capable J-15T; IMO most likely the prototype no. 571.

​The J-15T prototype was spotted in a Chinese report earlier this year. Global Defense Corp noted in April the T on its tail stands for “Tanshe” in Pinyin, meaning “catapult launch.” However, the first photos revealed are grainy and don’t provide good detail of the most important part of the prototype: the tow bar that attaches the plane’s nose gear to the catapult’s shuttle.

Whether the catapult is powered by steam, as in present US aircraft carriers, or an electromagnetic linear induction motor, as in the US’ Ford-class carriers that have yet to enter service or China’s upcoming Type 002, the shuttle shoots forward toward the front of the ship, rapidly accelerating the aircraft to flight speed and launching it off the front of the flight deck and into the sky. The additional power enables aircraft to take off with much more weight than if they were expected to launch under their own power, as on China’s present carriers or the UK’s HMS Queen Elizabeth, which have ramps on the bow to help planes take off.

Weight has always been a limiting factor for the J-15, an exceptionally large and heavy aircraft in terms of carrier-based fighters. As Sputnik has reported, the J-15 is 3 tons heavier than the US’ naval aviation staple, the F/A-18 Hornet. It’s also a clumsy 24 meters long, roughly the same size as the largest plane to ever fly from a US carrier, the A-5 Vigilante bomber. It’s not for nothing that Chinese media has derided the plane as a “flopping fish.”

At present, the J-15 is China’s only carrier-based jet aircraft. However, it could one day be joined by the FC-31, another product of Shenyang Aircraft Corporation rumored for years to be in consideration as a carrier-based fighter. As a fifth-generation aircraft, the stealthy FC-31 would become a rough counterpart to the US Navy’s F-35C Joint Strike Fighter, a version of the jet modified for naval aviation.

Reports earlier this year seemed to confirm the rumors: in July, the Chinese Aeronautical Establishment, the research and development branch of the Aviation Industry Corporation of China (AVIC), announced it was working with Shenyang to prepare a “new type of aircraft” for naval use. Then, in September, a photo emerged of an FC-31 with considerable modifications from previous photos of the aircraft and sporting AVIC’s logo on its empennage. However, that aircraft had no visible equipment for carrier operations attached, such as a landing tailhook.