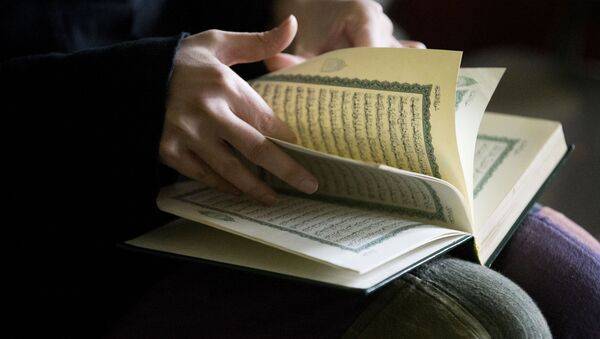 Setting a copy of the Quran on fire in August didn't constitute incitement against an ethnic group, the Swedish prosecution has ruled, deciding to drop a preliminary investigation into the matter.

"It is not possible to prove that a crime has been committed, burning a Quran in itself is not illegal", chamber prosecutor Sofia Syrén told national broadcaster SVT.

According to her, the assessment was based on witness information and videos from the scene. While the Swedish media and most politicians equivocally condemned the Quran burning as a provocation, the prosecution found no legal grounds to press charges.

"We have looked at what is happening around, how the person expresses themselves, and so on", Syrén said. "From the material it appears that there were people who expressed themselves in a way that may be judged as incitement against ethnic groups, but these cannot be identified", she stressed.

Earlier this year, Danish Hard Line party leader Rasmus Paludan pledged to burn a Quran in the Swedish city of Malmö, but was denied entry despite being a Swedish citizen. However, his fellow Hard Liners went on to accomplish his plans, later publishing a video of the event on the internet. This unleashed violent Islamic riots in the ethnic enclave of Rosengård, where fireworks were used, cars were burned, and angry Muslims pelted the police with stones. Dozens of arrests were subsequently made, and six people were charged with violent rioting.

"It may be relevant to prosecute more. In total, there are about 20 are suspects", chamber prosecutor Tomas Olvmyr told SVT, stressing that about 300 hundred people had participated in the riots in Rosengård.

The Malmö burning was followed by similar incendiary actions in other Swedish cities, none of which led to trials.

Last week, five Danish Hard Line members suspected of plotting to provoke Muslims by burning a Quran in Molenbeek, a Brussels district with a large Moroccan population, were arrested and ordered out of Belgium. This was welcomed by Sammy Mahdi, Belgium's secretary of state for asylum and migration, who described the men as a "serious threat to public order". "In our society, which is already very polarised, we don't need people who come to spread hatred", Mahdi was quoted as saying.

Paludan himself was arrested in neighbouring France and also expelled. Earlier in the autumn, he was arrested and expelled from Germany, whose security services labelled him as a "preacher of hatred".

Founded by lawyer Rasmus Paludan in 2017, anti-Islam and anti-immigration Hard Line gained fame and notoriety, first in Denmark and then in neighbouring countries, mostly through demonstrations against Islam in migrant enclaves subsequently released as videos. During the demonstrations, the Quran, Islam's centrepiece, is often torched or otherwise defaced, and is celebrated as an act of freedom of speech by the party itself. Yet, owing to numerous threats and assassination attempts, Paludan lives under round-the-clock police protection.

The party labels itself ethno-nationalist and advocates for the deportation of Muslims and non-white immigrants. In 2019, it almost made it into the Danish parliament, surprising many analysts.

000000
Popular comments
The swedish socialdemokrat globalist regime has since 2014 and well before that, invited and nurtured two million Muslims from the most backward medieval societies on earth. 90% of which living on social welfare funds and other subsidies. All they have to do is by implication to vote for the said party. Most of these are young or relatively young criminal males who spend their time burning cars, raping, dealing drugs and murdering. The effect of this action has been to call out the worst elements of these to an inevitable battle that would have occurred sooner or later anyway. Better now I'd say before they are too many...