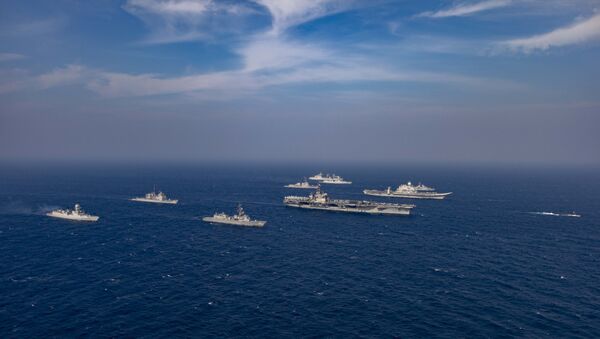 MOSCOW (Sputnik) - Australia and Japan have reached an agreement in principle on a defence treaty that is expected to strengthen their security ties and facilitate cooperation between defence forces, Australian Prime Minister Scott Morrison said on Tuesday.

"Australia and Japan have reached in principle agreement on a landmark defence treaty that will further deepen the countries’ strategic and security relationship", Morrison said in a statement, praising the Reciprocal Access Agreement (RAA) as a "pivotal moment" in the history of bilateral relations.

"This agreement paves the way for a new chapter of advanced defence cooperation between our two countries. The only other such agreement that Japan has struck with another country is with the United States 60 years ago", the prime minister went on to say.

Under the new deal, the two countries' defence forces will boost practical cooperation; joint involvement in multilateral drills will be facilitated; and a clear framework on the defence forces' operations in both countries will be formed.

"The significance of the RAA cannot be understated. It will form a key plank of Australia's and Japan's response to an increasingly challenging security environment in our region amid more uncertain strategic circumstances. As we finalise the RAA I thank the work done by my predecessors as well as by former Japanese Prime Minister [Shinzo] Abe across six years of negotiations", Morrison concluded.

The statement also said that the two sides agreed to hold consultations at the level of foreign and defence ministries in the 2+2 format in 2021.

"The Leaders instructed their respective Ministers for Foreign Affairs and Defence to further strengthen bilateral security and defence cooperation and hold the next Foreign and Defence Ministerial Consultations ('2+2') at the earliest convenient time in 2021", the agreement read.

The text also expressed serious concern about "the situation in the South China Sea and reconfirmed their strong opposition to any coercive or unilateral attempts to change the status quo and thereby increase tensions in the region", without mentioning Beijing outright.

At the same time, the agreement welcomed the signing of the China-dominated Regional Comprehensive Economic Partnership Agreement as an important step towards maintaining open markets in the region.