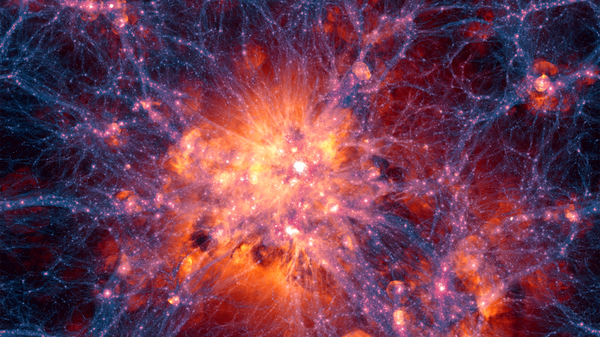 Max Gorbachev
All materialsWrite to the author
Scientists know that it exists and that it constitutes up to 85 percent of the universe, but besides this impressive detail, there is little we know about dark matter or what it consists of as it doesn’t emit or reflect light, which makes it impossible to detect with available sensor technologies.

Researchers at the JILA research institute have set their minds to solving one of the biggest mysteries in science by detecting the mysterious and elusive dark matter. For this, the scientists plan to use an atomic clock that tells time by measuring the oscillations of atoms. Older versions of atomic clocks were previously used when attempting to detect dark matter, but yielded no results. Researchers at JILA plan to use a new version that operates at higher optical frequencies and has an ultra-stable oscillator, which ensures steady light waves.

The JILA team has focused on detecting ultralight dark matter, which the scientists assume has a tiny mass (hence the name) that is less than a single electron. But at the same time, the researchers believe that ultralight dark matter has a huge wavelength that they assume makes it bound by gravity and ordinary matter.

"Nobody actually knows at what sensitivity level you will start to see dark matter in laboratory measurements", NIST/JILA Fellow Jun Ye said. "The problem is that physics as we know it is not quite complete at this point. We know something is missing but we don't quite know how to fix it yet.

We know dark matter exists from astrophysical observations, but we don't know how dark matter connects to ordinary matter and the values we measure. Experiments like ours allow us to test various theory models people put together to try to explore the nature of dark matter. By setting better and better bounds, we hope to rule out some incorrect theory models and eventually make a discovery in the future".

Scientists believe dark matter played a crucial role in the evolution of the universe. The search for this mysterious matter has been going on for decades. Researchers believe that the fact that it doesn’t emit, absorb, or reflect light is what makes it so elusive, but they have offered various theories about what it consists of. Among the most promising candidates are Weakly Interactive Massive Particles (WIMPs), axions, and sterile neutrinos. Another popular theory is that it consists of several types of particles that interact with each other.