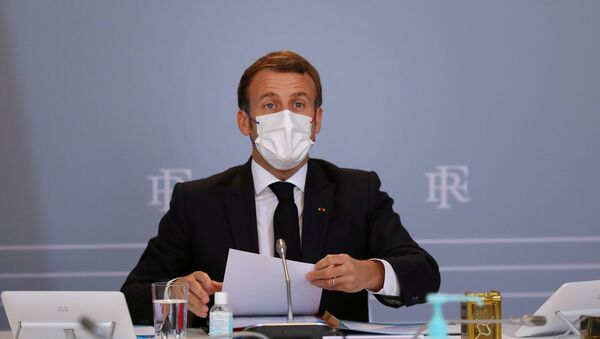 Oleg Burunov
All materialsWrite to the author
Earlier this month, the French president berated the Financial Times for "distorting" his words on Islamist separatism, referring to an article in the newspaper that has since been removed.

In an interview with The New York Times on Monday, French President Emmanuel Macron hit out at the English-language media over its coverage of a series of terrorist attacks that recently hit his country.

"When France was attacked five years ago, every nation in the world supported us", Macron told NYT columnist Ben Smith, in an apparent nod to a terror attack on the editorial staff of the French satirical newspaper Charlie Hebdo in January 2015, which claimed the lives of at least 12 people.

"So when I see, in that context, several newspapers which I believe are from countries that share our values […] when I see them legitimising this violence, and saying that the heart of the problem is that France is racist and Islamophobic, then I say the founding principles have been lost", the French president argued.

He insisted that "foreign media failed to understand [the essence of] 'laicite'", or secularism, which is seen as one of the pillars of French policy and pertains to separation of сhurch and state.

The president also referred to the French "model" as "universalist, not multiculturalist", adding, "in our society, I don't care whether someone is Black, yellow or white, whether they are Catholic or Muslim; a person is first and foremost a citizen".

Macron Blasts FT for 'Distorting' His Words on Islamist Separatism

The remarks came a few weeks after Macron sent a letter to the editor of the Financial Times (FT), clarifying his stance towards French Muslims after the newspaper accused him of "stigmatising" the minority community "for electoral purposes and of fostering a climate of fear and suspicion towards them".

"Let us not nurture ignorance by distorting the words of a head of state. We know only too well where that can lead", Macron tweeted at the time, also posting a link to his letter published on FT's website.

In the letter, he specifically underscored that he would "not allow anybody to claim that France, or its government, is fostering racism against Muslims" and that his country was in a fight against "Islamist separatism, never Islam".

Listing a series of Islamist terror attacks France has witnessed over the past five years, Macron indicated that there are unfortunately still "certain districts" in France and online which become "terrorist breeding grounds" where "small girls wear the full veil and are raised to hate our values".

"This is what France is fighting against […] hatred and death that threaten its children – never against Islam. We oppose deception, fanaticism, violent extremism. Not a religion" the French president pointed out.

How France's Anti-Terrorism Laws Have Changed Since the Paris Terror Attacks of 2015
The Financial Times later removed the questionable article from its website, saying that the decision was made after "it emerged" that the piece "contained factual errors".

Macron's letter to the newspaper followed the beheading of French history teacher Samuel Paty by a radicalised teenager in mid-October and a knife attack outside a church in the city of Nice on 29 October.

Paty was killed after he showed his pupils a cartoon of the Prophet Muhammad during a lesson about freedom of speech. Last month, Macron sparked a wave of protests and calls for French goods across the Muslim World to be boycotted after he praised Paty, pledging that France would never renounce its freedom of speech laws.

000000
Popular comments
Who the f... cares WHAT jews think? There is no such thing as "English-language media" It's mostly jewish rag or nothing. Anyone who buys and reads this garbage has a problem with their brain. Same goes to those who watch TV or listen to the radio like BBC or "American" propaganda.